Project based learning: Who Killed Will Shakespeare? & mystery activity or game 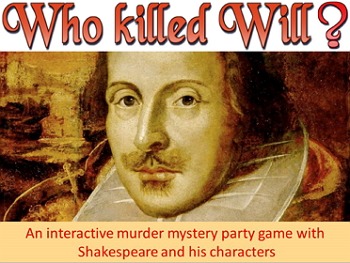 Something is rotten and it’s not in Denmark! Someone killed Shakespeare. Play your favorite character from one of Shakespeare’s plays while figuring out who killed the Bard. Acting experience and knowledge of police procedures are not necessary for a activity that will deepen student understanding (or skip the research and play as a mystery party game)

Will Shakespeare is dead - for a second time. But the laws have not quite yet caught up with the technology that brought him and many of his characters to life in our time. Therefore his characters are both suspects and investigators in his homicide.

This package contains two versions - one for a classroom activity and one for a mystery party game. It includes character dossiers for 6-30 guests, a director/host pack with complete instructions and the clues. Rubrics and asignments make this easy to use as a culminating activity. Can be adapted for a drama club event or performance too.

The party version includes suggestions for menus (if part of a dinner or light snacks), atmosphere and casting the roles make it easy for even a first-timer.

Preview contains sample character dossier, list of characters to choose from and how to play. This is included in the Shakespeare bundle

Total Pages
91 pages
Answer Key
Included with rubric
Teaching Duration
N/A
Report this Resource to TpT
Reported resources will be reviewed by our team. Report this resource to let us know if this resource violates TpT’s content guidelines.