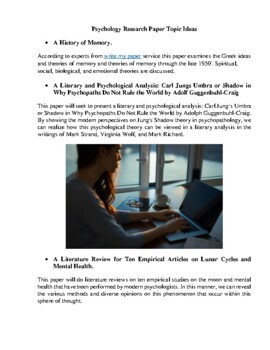 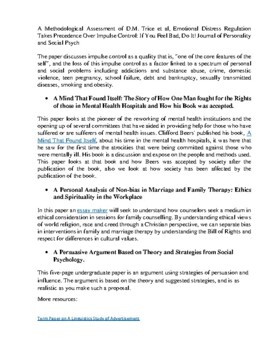 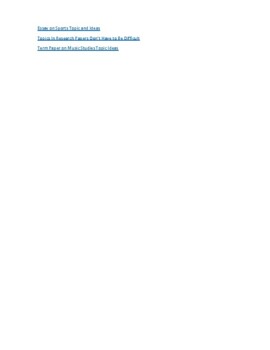 · A History of Memory.

· A Literary and Psychological Analysis: Carl Jungs Umbra or Shadow in Why Psychopaths Do Not Rule the World by Adolf Guggenbuhl-Craig

This paper will seek to present a literary and psychological analysis: Carl Jung`s Umbra or Shadow in Why Psychopaths Do Not Rule the World by Adolph Guggenbuhl-Craig. By showing the modern perspectives on Jung's Shadow theory in psychopathology, we can realize how this psychological theory can be viewed in a literary analysis in the writings of Mark Strand, Virginia Wolf, and Mark Richard.

· A Literature Review for Ten Empirical Articles on Lunar Cycles and Mental Health.

This paper will do literature reviews on ten empirical studies on the moon and mental health that have been performed by modern psychologists. In this manner, we can reveal the various methods and diverse opinions on this phenomenon that occur within this sphere of thought.

A Methodological Assessment of D.M. Trice et al, Emotional Distress Regulation Takes Precedence Over Impulse Control: If You Feel Bad, Do It! Journal of Personality and Social Psych

The paper discusses impulse control as a quality that is, "one of the core features of the self", and the loss of this impulse control as a factor linked to a spectrum of personal and social problems including addictions and substance abuse, crime, domestic violence, teen pregnancy, school failure, debt and bankruptcy, sexually transmitted diseases, smoking and obesity.

· A Mind That Found Itself: The Story of How One Man fought for the Rights of those in Mental Health Hospitals and How his Book was accepted.

This paper looks at the pioneer of the reworking of mental health institutions and the opening up of several committees that have aided in providing help for those who have suffered or are sufferers of mental health issues. Clifford Beers' published his book, A Mind That Found Itself, about his time in the mental health hospitals, it was here that he saw for the first time the atrocities that were being committed against those who were mentally ill. His book is a discussion and expose on the people and methods used. This paper looks at that book and how Beers was accepted by society after the publication of the book, also we look at how society has been affected by the publication of the book.

· A Personal Analysis of Non-bias in Marriage and Family Therapy: Ethics and Spirituality in the Workplace

In this paper an essay maker will seek to understand how counselors seek a medium in ethical consideration in sessions for family counselling. By understanding ethical views of world religion, race and creed through a Christian perspective, we can separate bias in interventions in family and marriage therapy by understanding the Bill of Rights and respect for differences in cultural values.

· A Persuasive Argument Based on Theory and Strategies from Social Psychology.

This five-page undergraduate paper is an argument using strategies of persuasion and influence. The argument is based on the theory and suggested strategies, and is as realistic as you make such a proposal.

Term Paper on A Linguistics Study of Advertisement

Essay on Sports Topic and Ideas

Topics In Research Papers Don’t Have to Be Difficult