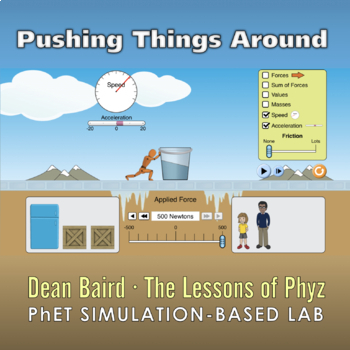 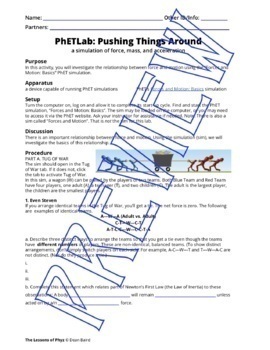 The Lessons of Phyz
158 Followers
Follow
Made for Google Drive™
This resource can be used by students on Google Drive or Google Classroom. To access this resource, you’ll need to allow TpT to add it to your Google Drive. See our FAQ and Privacy Policy for more information.

This activity uses PhET's Forces and Motion: Basics sim to explore Newton's First and Second laws of motion. The sim's tug of war simulation is used to explore balanced and unbalanced forces, and the notion that both rest and uniform motion can occur when forces are balanced.

I omitted a capstone analysis question here that could have cemented a = F/m based on observations made in the activity. I did that because I used this as a preliminary activity before students conducted an in-class hands-on activity with carts, masses, and motion analysis equipment. That's where I wanted them to put everything together. The documents are editable if you want to do things differently.