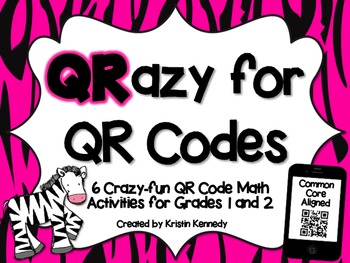 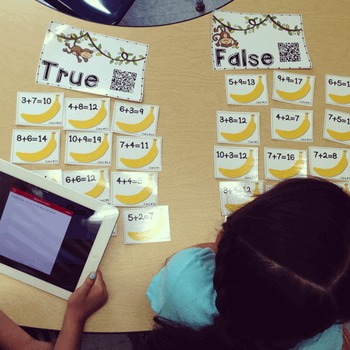 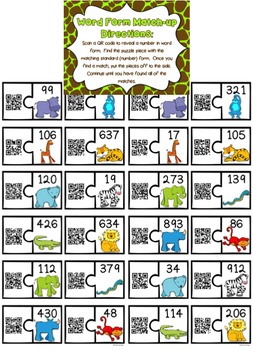 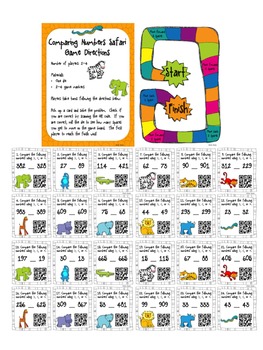 -Place Value Scan the Room: Played like I-Spy but with self-checking QR codes. Students identify how many ones, tens, and hundreds are in a given number. (1.NBT.2, 2.NBT.1)
-Comparing Numbers Safari Board Game: Students compare 2 and 3-digit numbers using the >, <, or = sign. (1.NBT.3, 2.NBT.4)
-Missing Addend Scavenger Hunt: Cards are placed around the room in random order and students record their answers in the order in which they solved them. (1.OA.4, 2.OA.2)
-Bananas for Addition Sort: Students sort addition equations (up to 20) based on whether they are true or false. Then they scan the QR code on the headers to get a list of the cards that should be in each pile. (1.OA.4, 2.OA.2)
-Word Form Match-up: Students scan a QR code to reveal a number in word form (up to the hundreds place). Then they look for the match in number form to connect the puzzle pieces. (2.NBT.3)
-Animals on a Roll: Students roll a cube, scan the QR code, and fill in the table on the recording sheet according to the number rolled. I included two versions of the recording sheet so you can differentiate- one with 1 more/less and 10 more/less, and another set with 10 more/less and 100 more/less. I included two sets of two-digit cubes and two sets of three-digit cubes. (1.NBT.5, 2.NBT.8)

All of the centers either have the directions written on the recording sheet or on a separate page so your students should be able to do them independently. I made this pack with my 2nd graders in mind, but it could also be a good challenge for 1st graders. Please be sure that you have a device that can scan QR codes before purchasing (iPod Touch, iPad, tablet, or laptop/desktop with a camera).