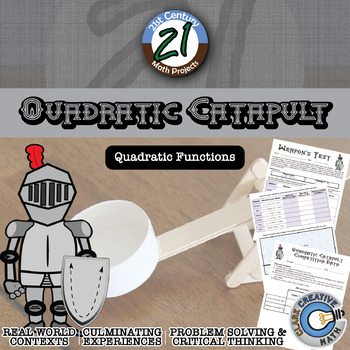 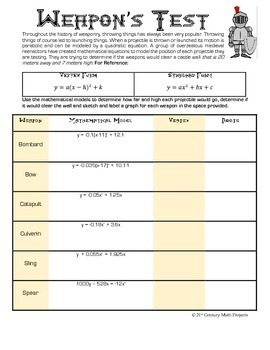 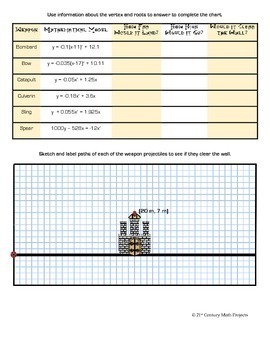 This 21st Century Math Project is a tremendous opportunity to integrate subjects in an Algebra 2 or PreCalculus classroom. Hands-on STEM based learning for hands-on student. Along using quadratic functions skills to solve projectile motion physics problems, students will engage in reflective writing and construction and design.

In this 25 page document you will be given a mapping to the Content Standards, an outline for how to implement the project, handout resources for students to use in collecting data and an optional follow-up inquiry. ***THIS PRODUCT HAS BEEN UPDATED WITH A GOOGLE SLIDES INTERACTIVE VERSION INCLUDED. REDOWNLOAD IF YOU HAVE IT ALREADY***

Of course I did not invent the idea of the Catapult Project, but I have extended it into my Algebra 2 / Pre-Calculus classroom.

Download the Preview to see everything that is included (besides the answers!)

-- In “Weapons Test”, students begin practicing using quadratic equations to model position functions. Students will determine which of the 6 functions has a path that goes over a castle wall. Determining the vertex is an important skill that they must practice.

-- In “Incoming”, students use the Kinematic Projectile Motion Formulas. A reference sheet to describe the variables is included and careful explanation of these are suggested.

-- and finally in “Quadratic Catapult”, students will design and build their own catapult device for a competition.

You may be interested in the following discounted bundles. SAVE $$$!

Log in
to see state-specific standards (only available in the US).
CCSSHSN-Q.A.3
Choose a level of accuracy appropriate to limitations on measurement when reporting quantities.
CCSSHSA-CED.A.1
Create equations and inequalities in one variable and use them to solve problems.
CCSSHSA-CED.A.2
Create equations in two or more variables to represent relationships between quantities; graph equations on coordinate axes with labels and scales.
CCSSHSA-CED.A.4
Rearrange formulas to highlight a quantity of interest, using the same reasoning as in solving equations. For example, rearrange Ohm’s law 𝘝 = 𝘭𝘙 to highlight resistance 𝘙.
CCSSHSA-REI.B.4
Solve quadratic equations in one variable.