Quien hizo eso? {2 Whole Class Games to Practice "Hacer" in the Past Tense} 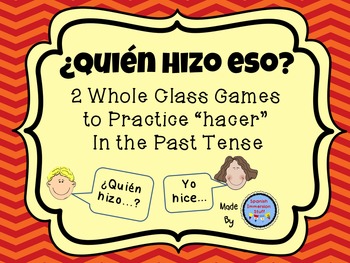 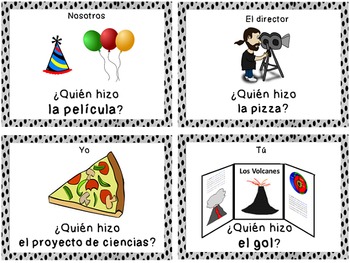 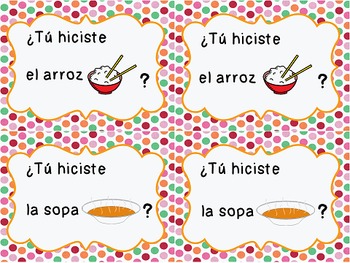 Spanish Immersion Stuff
1.8k Followers
Follow
Compatible with Easel Activities
This resource is compatible with Easel by TpT, a suite of digital tools you can use to make any lesson interactive and device-ready. Customize this activity and assign it to students, all from Easel. Easel is free to use! Learn more.

The verb "hacer" is another one of those tricky ones for my native English speaking Spanish immersion students! Many of them have fossilized errors with the different forms in the past tense and just need lots of opportunities to repeat the forms correctly again and again. These games help them do this!

This pack contains two games. There are 24 cards included in each game. One is a “zip-around” type game to practice the different past tense forms of the verb “hacer." Each student stands in a circle and receives 1-2 cards, depending on the size of the class. One student starts by reading the question on the bottom of his/her card (¿Quién hizo…(la sopa)?) The other students need to look at the top of their cards to see if they have the corresponding object. If they do, they should form a correct sentence with the pronoun/person on their card and the verb “hacer” (i.e. “Mi amiga hizo (la sopa)....”) Then they read the bottom of their card and look for the next student.

The second set of cards is a matching game that focuses on the tú/yo past tense forms of “hacer.” The object of the game is for students to find the peer that has the matching card. They do this by walking around and asking each other the question “¿Tú hiciste…(la tarea)?” Peers respond to one another by saying either “No, yo no hice…(la tarea)” if they do not have a match or “Si, yo hice…(la tarea)” if they do have a match.

Lots of repetition and practice – but so much fun the kids don’t even realize they are perfecting their grammar!

You may also be interested in my other Spanish grammar games or buying this set as part of a BUNDLE: