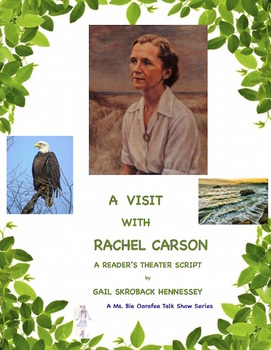 A Biologist and marine zoologist, Carson’s books shared her love of nature, especially the ocean and its inhabitants. Her book, Silent Spring, sparked concern in how chemical pesticides were harming our environment. Carson helped to start the environmental movement in our country, which led to the creation of the U.S. Environmental Protection Agency. This Reader's Theater Script could be used as a STEM biography any time of year or especially during the time of Earth Day.

Check out these additional resources on the topic of the environment

1. Studying the ocean? Looking for a resource for Earth Day or World Ocean Day? Introduce your students to Jacques Cousteau with this informative Reader's Theater Script. Oceanographer, photographer, scientist, inventor, writer and filmmaker, Cousteau spent his life studying the oceans and the marine life that lived in the oceans. His books and films on his studies sparked much interest in our oceans and created an awareness about the need for marine conservation. Part of my Ms. Bie Ografee Talk Show Series where Jacques Cousteau is a guest on her talk show and answers questions of her studio audience. There are 10 audience questioners, a Did You Know? section, comprehension questions, a teacher section with extension activities, links and the key: Jacques Cousteau: A Reader's Theater Script

2. Exploring the Ocean Blue: A Web quest, will introduce students to our oceans. There are nine informative web questions. Fun Facts, comprehension questions,extension activities and links are also provided as is the key. Can be used as part of a unit on oceans, for Earth Day, World Ocean Day or as an activity for a Friday, before a vacation break or as an end of the year activity. This can be a one day class resource or used for a couple of days depending on whether the activities(creative writing/art work/online simulation games, etc.) are used with the students: Exploring the Ocean Blue: A Webquest

4. In 1923, English mountaineer George Mallory was asked,”Why do you want to climb Mt. Everest?” His response, “Because it’s there.” Thousands have been trying to summit the world’s highest mountain peak since this time. Learn about Mt. Everest, Nepal and the Yeti with this webquest! May 29th,2013(60th anniversary of the first successful climb)Lots of extension activities,interesting facts and comprehension questions are included. Mt. Everest: A Webquest

5. WOMEN in SCIENCE: Share biographies of women who have made contributions in science: Marie Curie, biography.

A "studio" audience asks questions of Ms. Bie Ografee's guest, Marie Curie. There are comprehension questions, a Did You Know? section, a Teacher Page with extension activities, key and additional links:Marie Curie, A Reader's Theater Script

6. Learn about Katherine Johnson, a physicist, space scientist and mathematician, who played a very important role with NASA’s early space missions. The movie Hidden Figures highlights the role of NASA's "computers" such as Katherine Johnson and their contributions. Part of my Ms. Bie Ografee Talk Show Series of Reader's Theater Scripts, there are comprehension questions, a Did You Know? section,a Teacher page with extensions/links and key. A great STEM biography!Katherine Johnson, Reader's Theater Script

7. An English primatologist, Jane Goodall, has helped to change the attitudes people had toward animals, specifically the chimpanzee. Her method of studying chimpanzees involved living amongst them, for over 55 years. She is also known as an anthropologist, humanitarian and writer. She has worked for better treatment of animals in zoos and protection of the habitat of animals in the wild. https://www.teacherspayteachers.com/Product/Jane-Goodall-A-Readers-Theater-Script-4836410

* I also have web quests on elephants, giraffes, polar bears, rhinos and leopards.

Clipart of wave from openclipart.org

Total Pages
13 pages
Answer Key
Included
Teaching Duration
40 minutes
Report this Resource to TpT
Reported resources will be reviewed by our team. Report this resource to let us know if this resource violates TpT’s content guidelines.