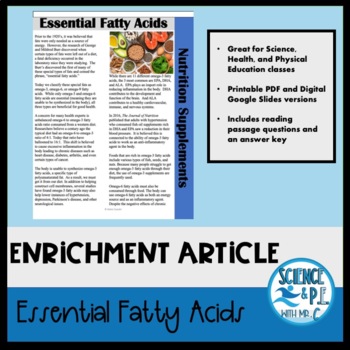 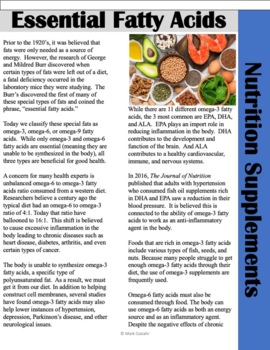 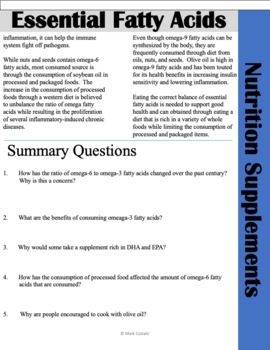 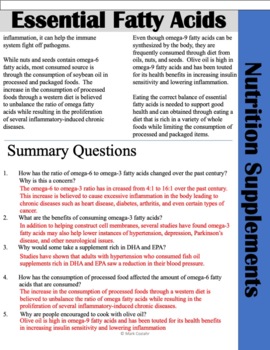 This article comes in both a digital and printable version (with an answer key) making it a great independent assignment or enrichment activity for students. It could also be a great sub plan activity for teachers. The Google Slides option is perfect for distance learning or using with Google Classroom.

I've written these articles to help promote reading across the curriculum (science, health, and physical education) while educating students on many of the fundamentals of nutrition and fitness.

This assignment can be used in a variety of ways:

Looking To Save Some $$$. A Bundle Is The Perfect Solution!

Acerola has been used to treat several internal and external issues in the body.It has been used as both an antimicrobial and antifungal remedy. As a superfood, Acerola is an excellent source of vitamin C and several other phytonutrients.

Ashwagandha has been used in Ayurvedic and traditional medicine for over 3,000 years as an adaptogen to help the body manage stress. It has also been shown to have anti-inflammatory properties in the body.This could be especially beneficial for people suffering with various types of arthritis, the swelling and tenderness of the joints

Bilberries are native to many parts of Northern and Central Europe and have been used for centuries for medicinal purposes. They have a high concentration of anthocyanin, an antioxidant that has been found to have anti-inflammatory properties.

The the popularity of Camu Camu has brought increased attention to the importance of preventing deforestation of the Amazon rainforest. Camu Camu is the most nutrient-dense source of vitamin C on earth.

Chlorella is a unicellular freshwater alga that is an excellent source of both macronutrients and micronutrients. Studies have found that adding chlorella to your diet may help lower cholesterol levels while adding a boost to your immune system.

Flaxseeds are great source of protein, fiber, and omega-3 fatty acids, as well vitamins and minerals. Studies have shown the proteins in flax seeds to improve immune function, lower cholesterol, and help prevent the growth of tumors.

Traditional medicine has use gogi berries to help decrease the effects of aging, improve eye heath and promote better functioning of the kidneys, liver, and lungs.Recently, several studies have been published to confirm these ancient beliefs.

Often described as the “queen of greens” kale is a one of the most nutrient dense vegetables available for consumption. A cup of chopped kale contains over 100% of the recommended daily consumption of vitamin A, Vitamin K, and vitamin C.

Green tea has long been known to have several medicinal benefits. Matcha is especially high in ECGC (epigallocatechin gallate), a catechin that has been shown to exhibit anti-cancer properties.

As a superfood, quinoa has a complete nutrient profile that makes it a more attractive option than other grains or cereals. Quinoa is a rich source of vitamins, minerals, and phytonutrients.

Centuries ago, chia seeds were used both as a staple food and in religious ceremonies for the Aztec people. Today, chia seeds have been used to support the regulation of diabetes and hypertension as well as reducing inflammation in the body.

As a nutrition supplement, many early studies on caffeine focused on the effects of caffeine on endurance exercise. Caffeine appears to decrease fatigue as well as the perceived levels of exertion during exercise. Studies have also shown caffeine can improve your levels of energy, cognitive functioning, and even your mood.

After winning the 100m gold medal at the 1992 Barcelona Olympics, Linford Christie shared that he had been using creatine as part of his preparation. Creatine’s popularity spiked as it became one of the most popular supplements on the market. In addition to being an energy source for muscle cells during the initial seconds of activity, creatine appears to have another benefit as well.

Electrolytes are minerals that dissolve into water and conduct an electrical charge. Electrolytes are needed for the transmission of nerve impulses, muscle contractions, physiological reactions, the regulating of pH levels, and keeping the body properly hydrated.

It was believed that fats were only needed as a source of energy and could be substituted freely with carbohydrates.However, George and Mildred Burr discovered that when certain types of fats were left out of a diet, a deficiency occurred that lead to the death of the laboratory mice they were studying.

Hypertrophy is the term used to describe an increase in muscle size because of training. Traditionally, 8-12 repetitions of an exercise at intensities around 70-75% of a 1RM have been recommended to induce hypertrophy. While this may result in hypertrophy, increases in muscle size are not exclusively connected to this magical formula of weight and repetitions.

Macronutrients (carbohydrates, proteins, fats, and water) are nutrients that your body requires in large amounts to function optimally. Many people become interested in understanding macronutrients while working to find a diet and nutrition plan.

In addition to all the physical benefits of exercise, there are also several mental benefits. Exercise has been linked to a reduction in anxiety and depression while increasing cognition, creativity, and self-esteem.

After exercise, stretching will increase blood circulation, bringing more oxygen and nutrients to any damaged muscles, and assist in activating the parasympathetic nervous system. Your parasympathetic nervous system is referred to as “rest and digest.” At this time, you body will lower its cortisol levels allowing the anabolic process of muscular hypertrophy to take place.

Have you ever felt that your muscles were “burning” during exercise? If so, then someone has probably told you that what you are feeling is the result of the build up of lactic acid. Despite this being a common belief, it is not the case.

Why Am I Sore?

Muscle soreness happens when a movement or activity is completed beyond the scope of what the body is used to accomplishing.Common symptoms include increased inflammation, tenderness, and fatigue.

The benefits of daily exercise extend beyond what you see in the mirror or on the scale. Claude Bouchard, the director of the human genomics laboratory at the Pennington Biomedical Research Center was quoted in a recent Time Magazine article as saying, “there is no pill that comes close to what exercise can do.”

Dopamine is an important neurotransmitter that is produced in the brain. In 2000, Swedish neuroscientist Arvid Carrlson won a Nobel Prize for his explanation of how dopamine can regulate brain function by sending messages between nerve cells.

To better understand obesity and it’s underlining causes, researchers have focused numerous studies to better understand several of the hormones related to obesity. Two hormones that have gained a lot of media attention in the past few years are leptin and ghrelin.

Researchers have linked several mood-based disorders (such as anxiety and depression) to low serotonin levels.When your serotonin levels are within a normal range you tend to be happier, more relaxed, more focused, and more emotionally stable.

Science and PE with Mr C