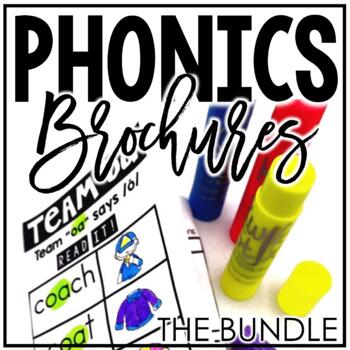 I created this resource to be used in guided reading groups. Many phonics skills contain two separate passages at different levels to meet the needs of various students. Each tri-fold combines phonics, fluency, comprehension, and word work. I used the form of a brochure because my students hate worksheets! It might seem silly, but turning a flat piece of paper into a brochure adds a lot of excitement to little ones. Adding a paperclip as a spinner adds another element of excitement.

Step 1 – Introduce the phonics skill/word family. I always show a PowerPoint or a poster with the phonics pattern and a list of words. We write the pattern in the air and we ALWAYS sing a song about the pattern. (Stay tuned… I’ll upload my PowerPoint slides in the near future.)

Step 2 – Read a list of words with the phonics pattern. Pictures are included.

Step 6 – Students learn they can use words they know to read and write new words. They will use a spinner (paperclip and pencil) or word boxes to build and write words with the phonics pattern.

Click on each individual unit to see a preview.

Short O and U Word Families

-er as in fern

-ir as in bird

-or as in torn

-ur as in burn

wh says /wh/ as in what (beginning)

Vowel Teams Set 2 This second set of Vowel Team Phonics Brochures integrates all of the various spellings for each sound into one activity/brochure. It includes 10 passages, word lists, word work, and comprehension questions.