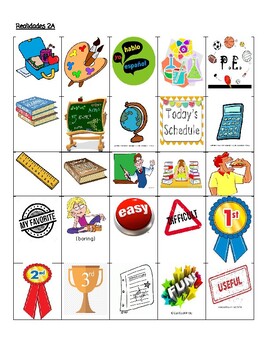 I always like to play this game at the beginning of a unit to introduce my students to the pronunciation of the new vocabulary in a more exciting way. The whole point of this game is repetition so they can hear the word and practice saying it in a less stressful environment. They really get into it! No prep is involved.... but you will need a Smartboard or a projector to project the image of the grid of pictures.

How to play: All you have to do is point to one of the pictures and then say the word in Spanish. If you are pointing to the picture and saying the correct word, the class (as a whole) should repeat after you.