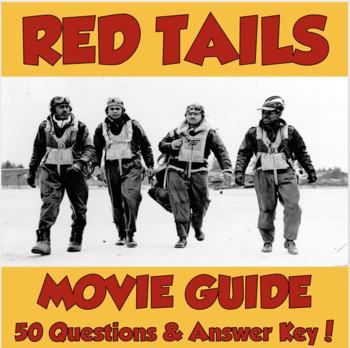 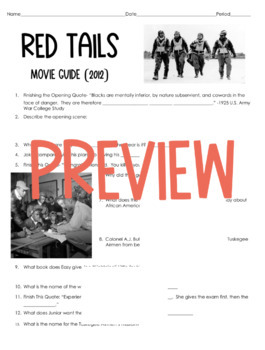 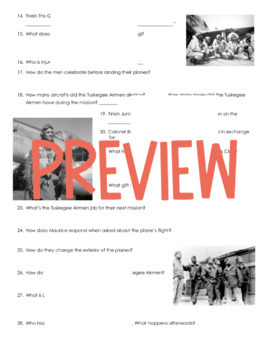 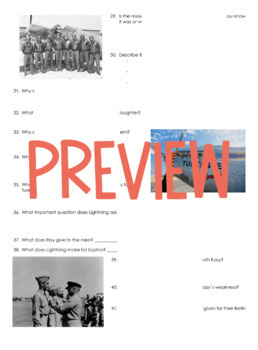 George Lucas' film, Red Tails, is an action packed look at the heroic efforts of the Tuskegee Airmen during World War II. These men were a part of the 332nd Fighter Group and fought with bravery for a country that still discriminated against them.

This film would be a wonderful resource during your WWII Unit, African American Studies, or Black History Month. The film has an all-star cast consisting of Nate Parker, Michael B. Jordan, David Oyelowo, Terrence Howard, Cuba Gooding Jr., Ne-Yo, Bryan Cranston, and more. The film is 125 minutes in length and is rated PG-13 for some sequences of war violence.

The movie guide contains 50 questions to assure the students stay on task for the film. This would be easy to leave for Sub Plans or to use for a last minute lesson. An answer key has been provided for your convenience. My students love this film and it covers a part of history that many need and want to know more about.

Loving- Based on the Loving v. Virginia Supreme Court Case/interracial marriage
The Help- Set during 1963, a young white author is inspired to write about African American women and their work as the caretakers and housekeepers for white families in Jackson, Mississippi.

Lee Daniels' The Butler- A man, Cecil Gaines, serves as a White House butler during seven administrations and has a front row seat to history.

Ghosts of Mississippi- Medgar Evers murderer takes the stand over 30 years after the initial crime. This true story follow Mrs. Evers and a Mississippi's D.A. fight for justice.

Kevin Hart's Guide to Black History Month- The documentary tells the stories of individuals that many may not be aware of when it comes to African American advancements and innovations and also shares the stories of some well-known figures.
Just Mercy- Based on the true story of Bryan Stevenson, a civil rights defense attorney, and his early work with the Equal Justice Initiative.

The Banker- It's based on the true story of two African American entrepreneurs, Bernard Garrett and Joe Morris, in the 1960s who wanted to expand the housing market to include more African Americans

By purchasing this item, you agree to use this for your personal classroom use only and will not share with others or post online. Additional licenses are available for a reduced cost.

Total Pages
4 pages
Answer Key
Included
Teaching Duration
2 hours
Report this Resource to TpT
Reported resources will be reviewed by our team. Report this resource to let us know if this resource violates TpT’s content guidelines.