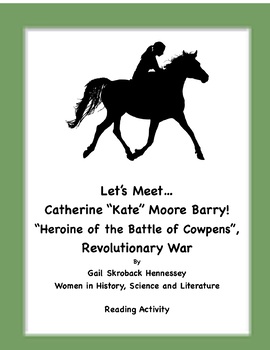 Studying the Revolutionary War? Looking for a female to highlight that contributed to to the formation of our nation? This reading passage(with extension activities) highlights the "Heroine of the Battle of Cowpens", Catherine "Kate" Moore Barry.

Part of my Let's Meet Series, students will learn about Kate Barry with a reading done in the first person. There are several Did You Know? fun facts about other women who helped with the Revolutionary War. There are comprehension questions and a map skill activity. The teacher page has some extension activities, additional links of interest and the keys.

Check out these resources on the Revolutionary War:

1. During the Revolutionary War, the Culper Spy Ring was organized to work to defeat the British. Agent 355 and other members of the spy organization were very important in the colonists being victorious in the War for Independence from England. Although Agent 355's real name remains a mystery, she was one of the women spies who showed that patriotism has no gender! Secret codes, invisible ink, LAUNDRY used to communicate messages, what spies did during the Revolutionary war, lots of information is weaved into Agent 355 being a guest on Ms. Bie Ografee's Talk Show with the studio audience asking her questions. https://www.teacherspayteachers.com/Product/Revolutionary-War-Spies-A-Visit-with-Female-Agent-355Culper-Spy-RingScript-2441726

There are 10 questioners, A Did You Know? section, comprehension questions and a Teacher Page with extension activities and the key. American Revolutionary War: A Visit with a Tory!

2. Reader’s Theater Script: A Visit with Joshua Crabtree, a Tory!