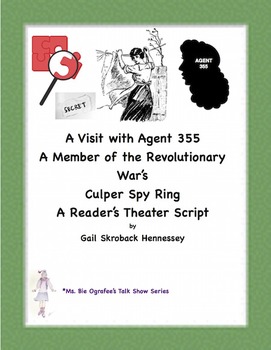 American Revolution/ Revolutionary War: Studying the 13 Colonies/Colonial Times? This resource would work great for such a unit of study. Part of my Ms. Bie Ografee's Reader's Theater Scripts, I really had fun developing this play about the Culper Spy Ring and specifically, Agent 355, one of the female member of the organization!

Great for study on the Revolutionary War, during Women's History Month or any time you are looking for a fun/informative play to use with your students!

Lots of extension activities, links, a Did You Know Fact section, comprehension questions and the key are also included.

George Washington asked for the spy ring to be organized and interestingly, it's secret group was only discovered in the 1930s, about 140 years after the American Revolutionary War by historians reviewing some of George Washington's private papers.

This additional resource would go great with this play:

There are 10 questioners, A Did You Know? section, comprehension questions and a Teacher Page with extension activities and the key. American Revolutionary War: A Visit with a Tory!

Total Pages
11 pages
Answer Key
Included
Teaching Duration
40 minutes
Report this Resource to TpT
Reported resources will be reviewed by our team. Report this resource to let us know if this resource violates TpT’s content guidelines.