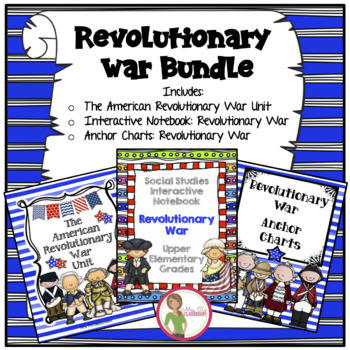 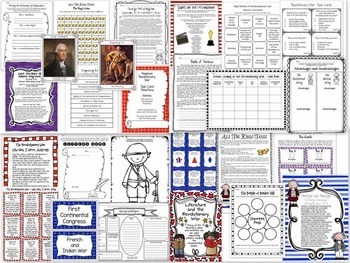 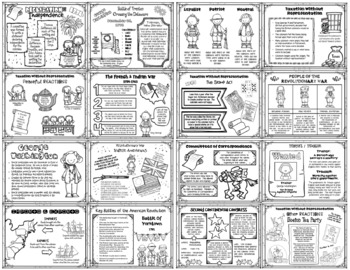 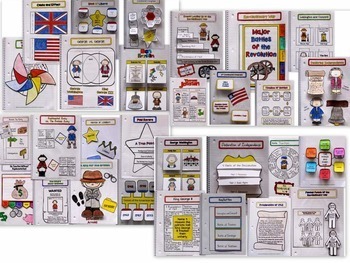 The emphasis of this comprehensive bundle are the causes, events, people, and results of the American Revolution.

This American Revolutionary War Unit consists of reading passages, worksheets, reference pages, activities, games, coloring pages, images/pictures, and vocabulary words for a word wall. There is an abundance of information included with the unit. There are many factual and interesting pages included in this unit that tell the story of this important historical war. The unit begins with the French and Indian War and ends with the Treaty of Paris. In between, all major events are included. The included Table of Contents lists all pages and activities that make up the unit.

One section of the American Revolutionary War Unit is a Literature and The Revolutionary War section. Although there are suggestions of books to use in this section, many of the activities can be completed without reading the recommended books. The books are not included with this unit. They are only suggested as books that might be useful and interesting during the study of the Revolutionary War. The books are quite popular and your media center may have them sitting on their shelves.

Answer Keys: Many of the pages and activities have answer keys. There are a few pages that contain constructive responses, where students explain their answers and multiple answers may be given. These pages do not contain answer keys. The graphic organizers that allow students to think and explain or list answers will not have answer keys either. ***Please see the PREVIEW for a complete Table of Contents for the unit.

*****THE INTERACTIVE NOTEBOOK PAGES AND ANCHOR CHARTS ARE COMBINED INTO ONE PRODUCT. ALTHOUGH COMBINED, THE COMBO CONTAINS TWO SEPARATE ITEMS:

There are specific interactive pages along with generic templates for any person, event or battle you may be studying with the Revolutionary War. ***Please see the PREVIEW for a complete Table of Contents for the interactive notebook.

The interactive pages are black and white, but, can be colored or copied on colored paper. Picture examples are included. I have included these as examples of how a page could appear.

These anchor charts are black and white because I created them to be used by students. My goal was to make a reference resource for students to take home with them when a new lesson has been introduced or a lesson already taught needs to be practiced or reviewed. Some students do better when presented with a visual model.

These black and white anchor charts also come in handy when a student has been absent from school. It gives the student an idea about the lesson(s) he or she may have missed.

I am also aware that many parents appreciate a visual of what is being taught in the classroom when their child is having a problem with classwork or homework, or when parents are helping their child with homework.

NOTE: These anchor charts are not meant to be lessons, but simply handy reference tools.

***Please click and view the Preview to see larger examples of items included in this bundle!

BUNDLED CONTENTS LISTED SEPARATELY FOR EACH OF THE 3 PRODUCTS:

Table of Contents for the American Revolutionary UNIT:

-The Result of the French and Indian War reading passage

-Time Line: Events Leading Up to the Revolutionary War - banners

-Time Line: Handout to glue on the time line banners (with answer key)

-Events Leading Up to the Revolutionary War graphic organizer

-Reaction to the Taxes (with answer key)

-The Boston Massacre (with answer key)

-Key Events on the Road to Revolution chart

-Committees of Correspondence (with answer key)

-Letters Home – writing from a colonist’s point of view

-The British Weekly – writing from a British point of view

-All the King’s Taxes – use after the simulation

-Lexington and Concord – illustrate a scene

-George Washington/Commander of the Continental Army

-Writing the Declaration of Independence (with answer key)

-Writing the Declaration of Independence – the 4 parts

-Women and the Revolution

-Which Side? (Native Americans and Africans)

-Battle of Trenton/Crossing the Delaware River (with answer key)

-The Winter at Valley Forge

-Battle of Saratoga (with answer key)

-Battle of Yorktown (with answer key)

-Treaty of Paris (with answer key)

-Putting Events in Order (use with Sequencing Events page)

-The Revolutionary War Who Has, I Have…Activity – includes directions and cards (The uncut original pages can be used as an answer key.)

The next section is labeled Literature and the Revolutionary War. Although there are suggestions of books to use in this section, many of the activities can be completed without reading the recommended books. The books are not included in this unit. They are only suggested as books that might be useful and interesting during the unit.

-George vs. George - introduction to the book

-George vs. George – illustrate a battle in the Revolutionary War

-Will You Sign Here, John Hancock – introduction to the book

-Can’t You Make Them Behave, King George? - introduction to the book

-Can’t You Make Them Behave, King George? – What do I Know About King George III?

-Can’t You Make Them Behave, King George? – rules of a good king

-Revolutionary War on Wednesday – introduction to the book

-What a Bright Idea

Below is the Table of Contents for the INTERACTIVE NOTEBOOK:

~ Divider pages for each section of interactive pages

~ Events Leading Up to the Revolutionary War

~ A Spy for the British – Benedict Arnold

~ Famous People of the Revolutionary War

~ The King’s Most Wanted Poster

~ Continental Army vs. The British Army

Below is the Table of Contents for the ANCHOR CHARTS:

Other Key Individuals and Groups of the Revolutionary War Title Page

The Shot Heard ’Round the World

Battle of Trenton - Crossing the Delaware

Other Important Events of the Revolutionary War Title Page

The Winter at Valley Forge

To purchase each of the materials separately, please click on the links below:

The Revolutionary War Anchor Charts can be purchased separately form the interactive notebook: