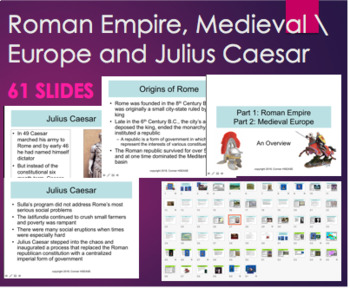 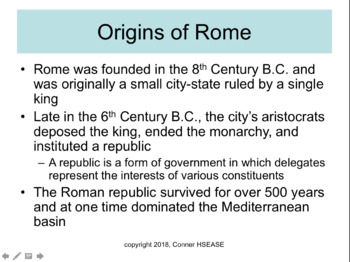 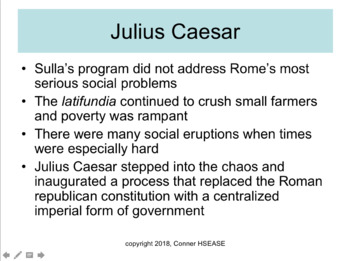 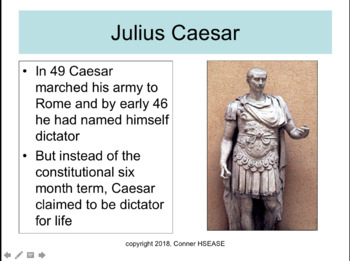 This 61 SLIDE PPT on the Roman Empire, Medieval Europe and Julius Caesar includes the following information. Please preview the information below before making your purchase. Thank you!

Rome was founded in the 8th Century B.C. and was originally a small city-state ruled by a single king

Late in the 6th Century B.C., the city’s aristocrats deposed the king, ended the monarchy, and instituted a republic

Aeneas migrated from Troy to Italy

Two of his descendants, Romulus and Remus, were abandoned by an evil uncle in the flooded Tiber River

A kindly she-wolf found them and nursed them to health

The boys grew strong and courageous and in 753 B.C., Romulus founded the city of Rome and established himself as its first king

From humble beginnings, Rome grew into a strong commercial center, in part because of its geographic location

Rome enjoyed easy access to the Mediterranean via the Tiber River, but because it was not on the coast, it was safe from invasion or attack by the sea

By the 6th Century B.C., trade routes from all parts of Italy converged in Rome

Establishment of the Republic

When the aristocracy deposed the king in 509 and established a republic, they instituted a republican constitution

Establishment of the Republic

The Senate was composed mostly of aristocrats with extensive political experience

They advised the consuls and ratified all major decisions

In the early 5th Century, tensions got so bad that the plebeians threatened to secede from Rome and establish a rival settlement

In order to maintain the integrity of the Roman state, the patricians granted the plebeians the right to elect officials known as tribunes to represent their interests

Originally the plebeians were authorized two tribunes, but that number eventually rose to ten

During the 4th Century, plebeians became eligible to hold almost all state offices and gained the right to have one of the consuls come from their ranks

By the early 3rd Century, plebeian-dominated assemblies won the power to make decisions binding on all of Rome

Republican Rome was gradually broadening the base of political participation

In times of civil or military crisis, the Roman constitution allowed for the appointment of a dictator who wielded absolute power for a term of six months

Expansion of the Republic

Rome expanded from central Italy, to the Italian Peninsula, to the Mediterranean basin

Defeats the Carthaginians in the Punic Wars between 264 and 146 B.C.

From Republic to Empire

Imperial expansion brought wealth to Rome, but the wealth was unequally distributed which aggravated class tensions

During the 1st Century B.C. and the 1st Century A.D., Roman civil and military leaders will gradually dismantle the republican constitution and replace it with a centralized imperial form of government

It was not suitable for a large and growing empire

Marius sided with social reformers who favored redistribution of land

Sulla sided with the conservative and aristocratic classes

In 87 B.C., Marius marched on Rome, placed the city under military occupation, and began hunting down his enemies

When Marius died the next year, Sulla moved to replace him

In 83, Sulla seized Rome and began slaughtering his enemies

During that period he killed some ten thousand individuals

The latifundia continued to crush small farmers and poverty was rampant

There were many social eruptions when times were especially hard

In the 50s B.C., Caesar led an army that conquered Gaul and made him very popular

But instead of the constitutional six month term, Caesar claimed to be dictator for life

He extended Roman citizenship to people in the imperial provinces

In 44 B.C. they assassinated him

Octavian was a nephew, protégé, and adopted son of Julius Caesar

He defeated his principal rival, Mark Anthony, and Anthony’s ally Cleopatra at Actium, Greece in 31 B.C.

Octavian consolidates his rule and in 27 B.C., the Senate bestows upon him the title

“Augustus” has religious connotations suggesting a divine or semidivine nature

Augustus centralized political and military power like Julius Caesar did, but he was careful to preserve traditional republican offices and forms of government and included members of the Roman elite in his government

Placed individuals loyal to him in all important positions

After Augustus, the Roman Empire continued to grow to the point that it surrounded the Mediterranean

How were populations controlled by the Romans?

Resolution of conflicts between the patricians and plebeians (tribunes)

Who were Romulus and Remus?

How long did a Consul of Rome serve?

Who were the patricians?

Who were the plebeians?

How long did a “dictator” rule?

How long did Caesar declare himself dictator or Rome?

Who did the Romans defeat in the Punic Wars?

Theme: Order in the absence of empire

The Franks temporarily revived empire; the high point of which was the reign of

After Charlemagne, his successor Carolingians had no effective means of defending against Magyars, Muslims, Vikings, and other invaders

In response, European nobles sought to protect their lands and maintain order in their own territories

Because the feudal hierarchy arose as a makeshift for defense against invaders, it always had a provisional, ad hoc, and flexible character

There was no “system”

However, medieval European society was characterized by

The country was not governed by the king but by individual lords who administered their own estates, dispensed their own justice, minted their own money, levied taxes and tolls, and demanded military service from vassals

Usually the lords could field greater armies than the king

In theory the king was the chief feudal lord, but in reality the individual lords were supreme in their own territory

Many kings were little more than figurehead rulers

The nobles maintained their armies by offering grants, usually land, to armed retainees

In exchange for the grants, the retainees pledged their loyalty and military service to their lords

The retainees gained increased rights over their land, to include the prerogative to pass on their rights to the heirs

A close relationship between political and military authorities developed

As a result, political authorities and military specialists merged into a hereditary noble class which lived off the surplus agricultural production that it extracted from the cultivators

Only by tapping into this surplus could the lords and their retainees secure the material resources necessary to maintain their control over military, political, and legal affairs.

Beginning in the mid 17th Century, this category become recognized as serfs– neither fully slave nor fully free

Not chattel slaves subject to sale by their master

But still owed obligations to the lords whose lands they cultivated

In exchange they had to perform labor services and pay rents in kind (a portion of the harvest, chickens, eggs, etc)

Women serfs churned butter, spun thread, and sewed clothes for their lords and their families

Since the lord provided the land, the serfs had little opportunity to move and had to get the lord’s permission to do so

The lord of the manor and his deputies provided government, administration, police services, and justice for the manor

Many lords had the authority to execute serfs for serious misconduct

Transition to the High Middle Ages

The kings of England and France used their relationships with retainees, and particularly with merchants, to build powerful, centralized monarchies

Still no one could consolidate all of Europe under a single empire.

The clergy of the Roman Catholic Church

The result was a society marked by political, social, and economic inequality

By the 12th Century, the ritual by which a young man became a knight commonly included the candidate placing his sword upon an altar and pledging his service to God

With chivalry, warriors were encouraged to adopt higher ethical standards and refined manners and become cultivated leaders of society

The chivalric code called for a noble to devote himself to the causes of order, piety, and the Christian faith rather than seeking wealth and power

How was order maintained in the Early Middle Ages?

How was order maintained in the Early Middle Ages?

In the absence of a strong centralized authority, local political and military elites worked out various ad hoc ways to organize and protect their territories

How was order maintained in the High Middle Ages?

How was order maintained in the High Middle Ages?

The regional stability of the Early Middle Ages allowed powerful regional states to be built, but there was still no single European Empire

Total Pages
61 pages
Answer Key
Does not apply
Teaching Duration
1 hour
Report this Resource to TpT
Reported resources will be reviewed by our team. Report this resource to let us know if this resource violates TpT’s content guidelines.