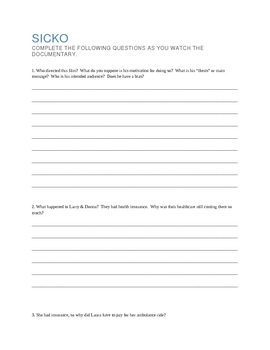 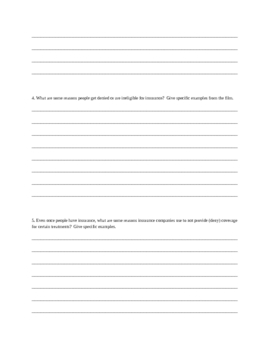 This file contains 23 reflection questions for the Michael Moore documentary, SICKO. This film, released in 2007, examines the healthcare systems of the US, Canada, England, France and Cuba. This printable question sheet encourages students to engage and reflect on the film as they watch it.

The film is 123 minutes long, so this activity took two full class periods (80 mins each) to watch the film and then use the reflections on the worksheet to spur discussion in small groups and as a class.

The film and questions are appropriate for high school or older. I originally used it in HSP3M, a grade 11 introductory Anthropology, Psychology, Sociology course. It was tied to lessons on social institutions and their roles in society.

I did not design the worksheet as something to be marked - but mainly to serve as a focusing tool for students as they watched the film and then to generate discussion points afterwards.

This work is licensed under a Creative Commons Attribution-NonCommercial 3.0 Unported License.
Total Pages
9 pages
Answer Key
Not Included
Teaching Duration
3 hours
Report this Resource to TpT
Reported resources will be reviewed by our team. Report this resource to let us know if this resource violates TpT’s content guidelines.