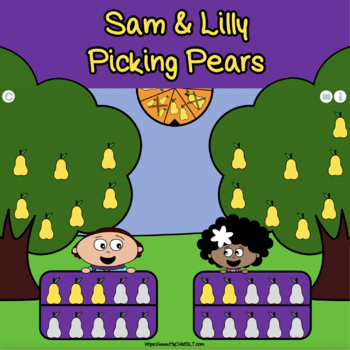 Sam & Lilly Picking Pears, is a fun PowerPoint resource that could be used in your sessions.

To play, the younger player starts.

The target is to pick the pears from the tree and fill the box.

- One Pear: Pick one pear from your tree and put it in your box.

- Two Pears: Pick two pears from your tree and put them in your box.

- Three Pears: Pick three pear from your tree and put them in your box.

- Four Pears: Pick four pears from your tree and put them in your box.

- Crossed one pear: Take one pear from your box and place it back on the tree.

- Crossed two pears: Take two pears from your box and put place back on the tree.

- Crossed three pears: Take three pears from your box and place them back on the tree.

The first player to put all ten pears in their box wins!