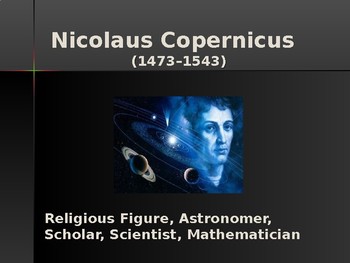 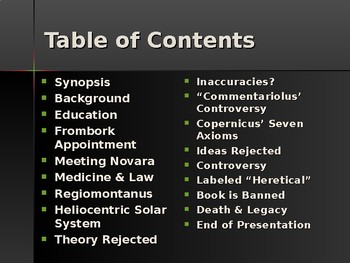 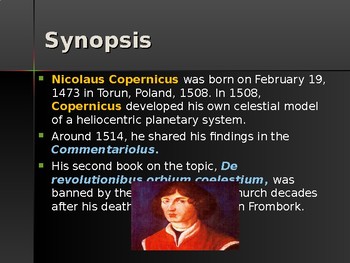 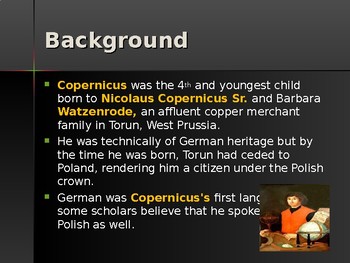 This is a 20 slide, highly animated, power point presentation on Science & Medicine – Key Figures - Nicolaus Copernicus. Each of the slides are editable so you can modify the slides and to the presentation as you need to.

Nicolaus Copernicus was born on February 19, 1473 in Torun, Poland, 1508. In 1508, Copernicus developed his own celestial model of a heliocentric planetary system. Around 1514, he shared his findings in the Commentariolus. His second book on the topic, De revolutionibus orbium coelestium, was banned by the Roman Catholic Church decades after his death.

During the 2nd century, Ptolemy had invented a geometric planetary model with eccentric circular motions and epicycles, significantly deviating from Aristotle's idea that celestial bodies moved in a fixed circular motion around the earth. In an attempt to reconcile such inconsistencies, Copernicus's heliocentric solar system named the sun, rather than the earth, as the center of the solar system.

1) Planets don't revolve around one fixed point.
2) The earth is not at the center of the universe.
3) The sun is at the center of the universe, and all celestial bodies rotate around it.
4) The distance between the earth and sun is only a tiny fraction of stars' distance from the earth and sun.
5) Stars do not move, and if they appear to, it is only because the earth itself is moving.
6) Earth moves in a sphere around the sun, causing the sun's perceived yearly movement.
7) Earth's own movement causes other planets to appear to move in an opposite direction.

Copernicus became a symbol of the brave scientist standing alone, defending his theories against the common beliefs of his time.

This is one of many power point presentations I offer in my store under the heading …. Science & Medicine.