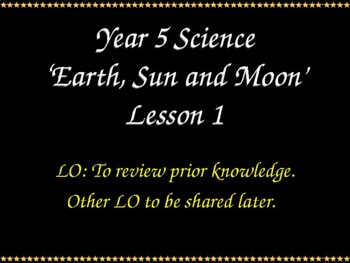 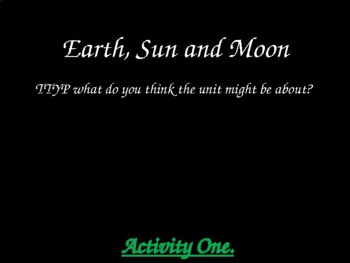 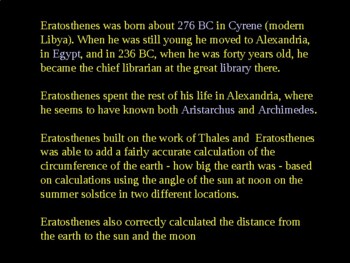 5 powerpoints on this interesting Science theme.

Introduce the new unit to the children and explain that it will run until Easter. The name of the unit is ‘Earth, Sun and Moon’ – TTYP what do you think the unit might be about?

Pose this question and ask the children to discuss on their tables: Is the Earth flat? Take feedback and come to the conclusion that the Earth is not flat, it is spherical. How do we know this? Elicit that none of us have been up in a spaceship! Sometimes it is difficult to collect our own evidence so our evidence is based on secondary sources. Read the story of Eratosthenes who first started to suspect that the world wasn’t flat. Look at the other things which show that the world isn’t flat. (New star science page 5).

Take feedback from the children and ascertain that all three bodies in question are spherical in shape.

TTYP – what topic did we introduce last week? What facts did we establish last week? Earth, Sun and Moon – all three bodies are spherical.

Explain today’s learning objectives and explain that this will be a very practical lesson.

Show the children a variety of spherical objects including:

What do all of these objects have in common? They are spherical.

Come back together and ask pairs to share their ideas and justifications. Explain to children that if a pea represents the Earth then the beach ball represents the Sun and the seed the Moon. Ask three children to hold the three spheres and position them in the classroom to give an idea of their relative distances apart.

Lead into a discussion about how the sun and moon appear to be very small in the sky. Why is that? (They are far away).

Use the analogy of an aeroplane; up close it looks huge, at the other end of the runway it looks smaller – and when it is in the sky it looks tiny.

The further away something is, the smaller it looks. That’s why a massive sphere like the sun looks like it’s small.

Start by recapping last lesson – put all the spherical objects back out and ask children to TTYP and tell them the conclusions we drew about relative size. Come back together and recap that we decided if the beach ball was the sun, the bead would be the earth and the peppercorn the moon. The moon is roughly ¼ of the size of the earth and roughly one million earths could fit inside the volume of the sun.

TTYP and talk about where the sun shines in your home or school at different times of the day. Come back together and take feedback. Ascertain that, at some time of the day the sun is on my back garden and at other time of the day it is not etc.

TTYP and talk about shadows. Come back together. Do shadows look the same throughout the day: agree that the length of shadows changes, they are at their longest at around midday when the sun is at its highest point.

Show the graphic from

which shows the sun appearing to move across the sky.

Ask: Is the sun really moving across the sky? Explain to the children the sun and stars actually stay still, it is the earth that is moving.

Choose three children to hold the three spherical objects which represent Earth, Moon and Sun. Position the sun in the middle of the room – recap that they are very far away from each other.

Show that it is the sun which is spinning on its axis THE SUN DOES NOT MOVE.

Revise what we have learned so far and set the science mini project homework which will replace normal homework for two weeks – outline expectations.

Talk about the recent activity with the moon being closer to earth than it has been for 2 decades. It was 14% bigger and 30% brighter last night.

Watch the video at the website below which explains the earth’s orbit.

Come back together and use woodlands junior website to explain night and day.

Use a globe, a torch and some child volunteers to demonstrate.