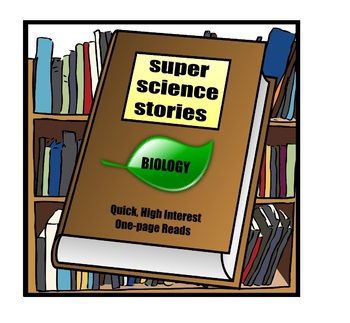 Note: These readings can be found in "Science and Literacy - Biology Bundle" and the "Biology Case File - Collapse". If you have purchased either of these, you already have these readings.

This is a collection of 11 short and engaging non-fiction stories on the subject of ecology and conservation. Keys and a bibliography are also provided.

- Global climate change is changing the Arctic ecosystem from the bottom up.

Under Lock and Keystone

- Ants, aphids, and spruce trees have a complicated symbiotic relationship. Is slightly sinister mutualism a thing?

-Trees can coordinate their release of seeds to control the wild boar population. People are messing with this system.

Salmon and the Nitrogen Cycle

-When salmon return to rivers to spawn, they play a major role in the terrestrial nitrogen cycle.

-The Kihansi spray toad lived on 5 square meters of wetland below a waterfall. The waterfall was diverted for hydroelectric power. Should the needs of the toads or the human population take priority?

-The Panamanian golden frog was a victim of chytrid fungus. It is kept alive by captive breeding but may never be able to be re-released into the wild.

-The frozen zoo keeps frozen genetic samples of more than 1,000 species. But how can animal culture be preserved?

How the Rhino Lost His Horn

-Should horn removal be used to help save the endangered rhino?

-Invasive Arctic foxes and rats ate their way through the Aleutian Island sea bird population. This affects nutrient cycling in the ecosystem.

Terms of Use: This document is for personal use only and may only be used by the original purchaser. This entire document, or any parts within, may not be reproduced or displayed for public viewing. You may NOT electronically post this product online including to teacher blogs, classroom websites or school networks. Failure to comply is a copyright infringement and a violation of the Digital Millennium Copyright Act (DMCA).