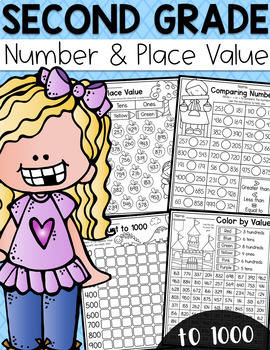 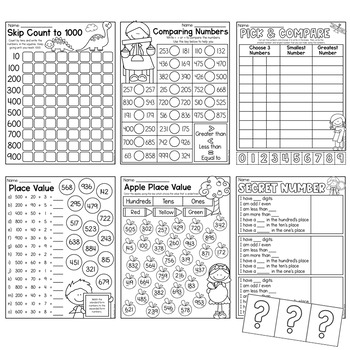 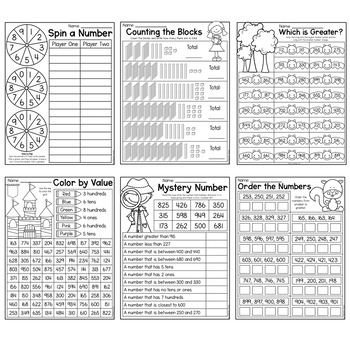 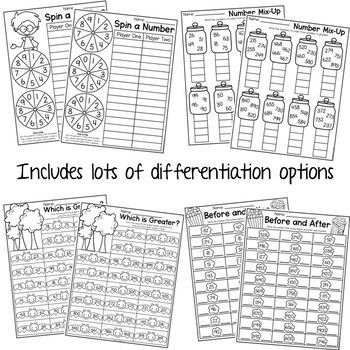 This packet is jammed full of worksheets to help your students practice and understand 3 digit numbers and place value. It includes over 70 engaging worksheets for second grade which cover number order, skip counting, base ten blocks, number comparison, expanded formation and so much more! It includes a whole bunch of differentiation options too so that you can cater to all the students in your classroom. It is perfect for whole-class activities, math stations, fast finisher activities, homework and review.

♥ What Comes Before and After? - Paste the number that comes before and after each number.

♥ Before and After (2 digit & 3 digit) - Write the number that comes before and after each number.

♥ What’s In Between? - Write the number that comes between each number.

♥ What Comes Before, Between and After? - Write the number that's before, between and after.

♥ Order the Numbers - Order the numbers from smallest to greatest.

♥ Find 10 Less and 10 More - Paste the number that is ten less and ten more than each number.

♥ A-Maze-ing Skip Counting (by 5’s and 2’s) - Skip count to help the character get through the maze.

♥ Number Patterns - Find the rule and continue the number patterns.

♥ What’s the Rule? - What's the rule shown in the number patterns?

♥ True or False - Paste the number comparisons by whether they are true or false.

♥ Greater Than and Less Than - Write a number that is greater than or less than each number.

♥ Roll a Bigger Number - In partners, each take a turn to roll 3 die. Write the numbers displayed on the dice and then compare them using < > or =. The player with the largest number wins.

♥ Spin a Number (2 digit & 3 digit) - In partners, spin the spinners to reveal a number and color the number which is greatest.

♥ Pick and Compare - Pick 3 numbers and write them in the boxes. Write the smallest number and largest number you can make out of the numbers.

♥ Tens and Ones - Match the base ten blocks to the numbers.

♥ Count the Hundreds - Count how many base ten blocks there are and write how many.

♥ Counting the Blocks - Count the blocks and write how many.

♥ Hundreds, Tens and Ones - Write how many hundreds, tens and ones are displayed by the base ten blocks.

♥ MAB Counting - Count the blocks and write how many there are in number form.

♥ Secret Number (2 digit & 3 digit) - Write a secret number and cover it with the flaps. Write some clues to help your classmates guess.

♥ Odd and Even Ocean - Color the odd fish red and the even fish yellow.

♥ Odd and Even Sorting - Sort the numbers by whether they are odd or even.

♥ Place Value Monsters - Write how many hundreds, tens and ones are in each number.

♥ Place Value Digits - Write the value of the underlined digits.

♥ Sort by Hundreds - Sort the numbers by how many hundreds they have.

♥ Color by Value - Color the numbers using the key.

♥ Pencil Place Value - Match the expanded form to the numbers.

♥ Place Value Match - Match the numbers to the expanded form.

♥ Expanded Numbers - Expand the numbers to show how many hundreds, tens and ones.

♥ Write the Number - Write the numbers in standard form.

♥ Change to Standard Form - Rewrite the numbers in standard form.

♥ Mystery Number (2 digit & 3 digit) - Read the clues, write the number that matches and color it in. Keep going until there is only 1 number left.

♥ Write the Numbers - Write the numbers in word form.

I welcome and appreciate any feedback, comments or suggestions.