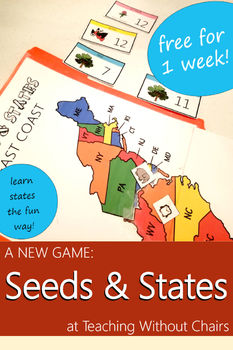 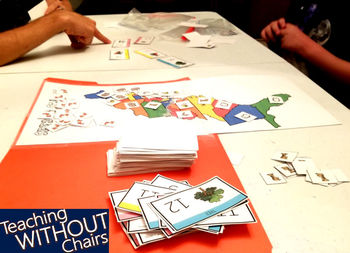 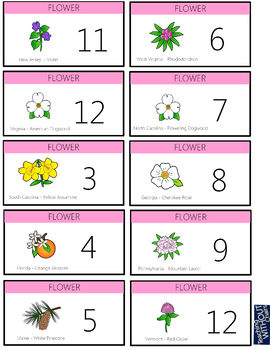 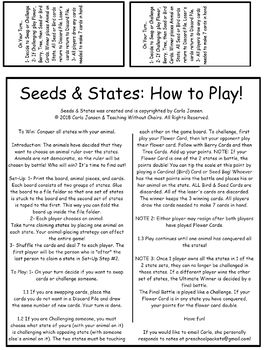 Seeds & States is a fast-paced, competitive game that incorporates math, strategy, and geography! Use this East Coast version to learn the names and locations of 17 eastern states! It's a great game to use as a reward, incentive, lesson, or for early finishers! It's also perfect for homeschoolers and gameschoolers who are working on state geography or memorizing the states!

This set comes with a 2-page game board, animal pieces, cards (flower, berry, tree, Cardinal, and seed bags), and instructions! Fun Fact: The flowers on each state correspond to that state's official flower!

Here's a copy of the Instructions so you can see how to play:

Conquer all states with your animal.

Introduction: The animals have decided that they want to choose an animal ruler over the states. Animals are not democratic, so the ruler will be chosen by battle! Who will win? It's time to find out!

2- Each player chooses an animal. Take turns claiming states by placing one animal on each state. Your animal-placing strategy can affect the entire game!

3- Shuffle the cards and deal 7 to each player. The first player will be the person who is "after" the last person to claim a state in Set-Up Step #2.

1- On your turn decide if you want to swap cards or challenge someone.

1.1 If you are swapping cards, place the cards you do not want in a Discard Pile and draw the same number of new cards. Your turn is done.

1.2 If you are Challenging someone, you must choose what state of yours (with your animal on it) is challenging which opposing state (with someone else's animal on it). The two states must be touching each other on the game board. To challenge, first play your Flower Card, then let your opponent play their flower card. Follow with Berry Cards and then Tree Cards. Add up your points.

NOTE: If your Flower Card is one of the 2 states in battle, the points double! You can tip the scale at this point by playing a Cardinal (Bird) Card or Seed Bag! Whoever has the most points wins the battle and places his or her animal on the state. ALL Bird & Seed Cards are discarded. All of the loser's cards are discarded. The winner keeps the 3 winning cards. All players draw the cards needed to make 7 cards in hand.

NOTE 2: Either player may resign after both players have played Flower Cards.

1.3 Play continues until one animal has conquered all the states!

NOTE 3: Once 1 player owns all the states in 1 of the 2 state sets, they can no longer be challenged in those states. If a different player wins the other set of states, the Ultimate Winner is decided by a final battle.

The Final Battle is played like a Challenge. If your Flower Card is in any state you have conquered, your points for the flower card double.