Selma by Ava DuVernay and Obama's Speech at Selma: Practice with Analysis 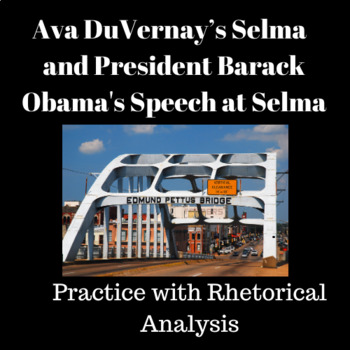 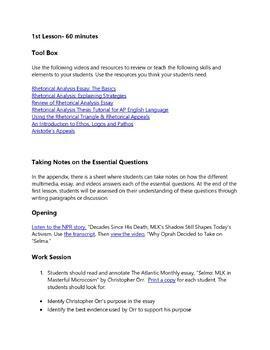 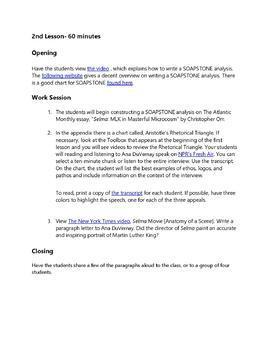 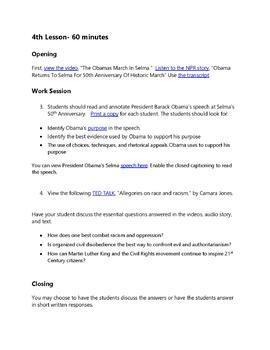 Students learn about John Lewis and Ana DuVernay, who directed the film, Selma.

Students will read, listen to and view supporting clips while learning the necessary elements to analyze the text and film. Students will show mastery of the standards at the end of the lesson through a SOAPSTONE Analysis, a Socratic Seminar, short paragraph responses and a written timed essay scored on an AP style rubric.

There are sources for teaching the Socratic Seminar, as the lessons act as support for the argument. The packet includes complete lessons, Common Core standards, essential and key questions.

Log in to see state-specific standards (only available in the US).
CCSSCCRA.W.1
Write arguments to support claims in an analysis of substantive topics or texts, using valid reasoning and relevant and sufficient evidence.
CCSSSL.11-12.1d
Respond thoughtfully to diverse perspectives; synthesize comments, claims, and evidence made on all sides of an issue; resolve contradictions when possible; and determine what additional information or research is required to deepen the investigation or complete the task.
CCSSRI.11-12.6
Determine an author’s point of view or purpose in a text in which the rhetoric is particularly effective, analyzing how style and content contribute to the power, persuasiveness, or beauty of the text.
Total Pages
36 pages
Answer Key
Rubric only
Teaching Duration
1 Week
Report this Resource to TpT
Reported resources will be reviewed by our team. Report this resource to let us know if this resource violates TpT’s content guidelines.