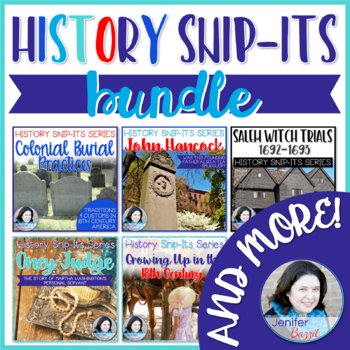 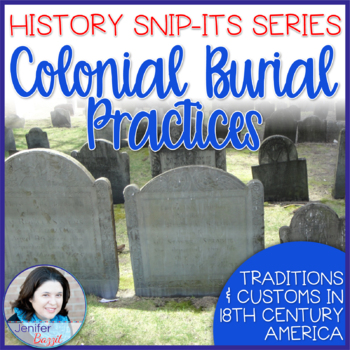 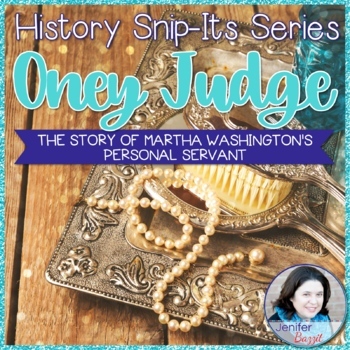 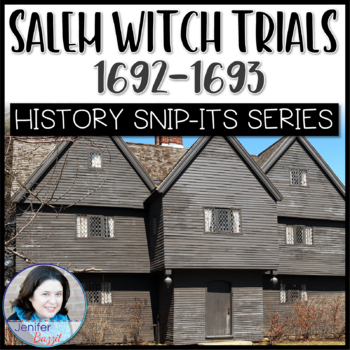 Jenifer Bazzit - Thrive in Grade Five
7.5k Followers
Follow
Easel Activities Included
Some resources in this bundle include ready-to-use interactive activities that students can complete on any device. Easel by TpT is free to use! Learn more.

Products in this Bundle (22)

The Sensational History Snip-Its Series promotes fascinating stories your students (and maybe you) have never heard. Bring history to life in your classroom by adding some dimension to our founding fathers (and mothers), historical events, documents, lifestyles, and people!

I created this series because I began to think about the many historical places and teacher workshops I'd been to and the fascinating things I have learned over the years as a history teacher. Some of these things just don't fit into my traditional units, so I have decided to offer them as short history snip-its.

Sensational History Snip-Its articles with accompanying questions are perfect to use in many situations:

* An exciting break from your regular unit of study

Read a synopsis of each History Snip-Its Story here:

Oney Judge - Runaway Enslaved Servant: Oney Judge was born into slavery in George Washington's household. As a teenager, Oney became Martha Washington's personal servant and began to travel with her. One night, Oney escaped and the Washingtons tried desperately to get her back.

The Story of Nancy Hart: Nancy Hart is a patriot woman living on the Georgia frontier. She uses an interesting method to gain entry to British military camps as a spy. She is certainly a woman who can take care of herself and her family. She holds British soldiers at bay in her home when they enter her home under suspicious circumstances. You've never heard a story like this!

John Hancock - Tea Smuggler?: John Hancock was an important founding father. He is known for his famous large signature on the Declaration of Independence. He helped fund many protests in Boston. However, did you know that he was also involved in the smuggling business? He made enormous amounts of money by smuggling tea and other goods into the colonies. He was a good friend to Sam Adams...Did Hancock's illegal smuggling have anything to do with the Boston Tea Party? Read this article to find out! Your students will love learning some personal details about John Hancock's life!

Colonial Burial Practices: Did you know that colonial funerals were often lively, friendly events? Did you know that the family of the deceased often gave away gifts, like gloves, to people who attended the funeral? Did you know cabinetmakers were usually asked to build caskets? Your students will love learning about the traditions surrounding death in the 18th Century!

Colonial Jails and Punishments: Your students will be fascinated when they read about punishments in the 18th century. Public whippings, ear nailings, and time in the pillory are all foreign concepts to our students today. Share this aspect of 18th century culture with your students!

The Story of Enoch Crosby: Shoemaker and Spy: Enoch Crosby is considered one of the first secret agents of the United States. This young shoemaker was traveling to rejoin the Continental Army when he was mistaken for a loyalist. He was able to infiltrate several loyalist groups and used the information he learned to help the patriot cause.

Colonial Christmas Traditions: Traditions varied from region to region. There was one region that pulled out all the stops to celebrate Christmas in a big way. Read this informational passage to find out how 18th century colonists celebrated this holiday.

George Washington - Genius Farmer: George Washington was a master farmer. His methods of crop rotation helped to create healthy crops. Washington's 16-sided barn was well-designed and contributed to the success of his farming operation. Students enjoy learning about the ways that animal poop was used to fertilize Washington's fields.

18th Century Hygiene: People smelled really, really bad in the 18th Century! Hygiene standards in colonial days were much different than our cleanliness standards today. Most colonists refused to bathe more than twice per year and their teeth often rotted due to the harmful ingredients in toothpaste. This lesson is definitely a student favorite!

Salem Witch Trials: The Salem Witch Trials were not about evil. They were the result of rumors, suspicions, and possibly other factors. The witch hysteria started when three young girls accused women of "bewitching" them. The witch trials had a large impact on the colony of Massachusetts and led to the deaths of many.

Burr-Hamilton Duel: Both Alexander Hamilton and Aaron Burr were active politically and held important roles in early American history. However, Alexander Hamilton liked to use his political influence to sway others' votes and rival Aaron Burr was often the topic of discussion. Burr challenged Hamilton to a duel in an attempt to restore his reputation but the tragic event that followed did just the opposite. Once an American Revolution hero, Burr's public persona never recovered from the effects of the duel.

John Laurens - An Unknown Founding Father: Although many of us have never heard of John Laurens, he served in an important role during the American Revolution. Laurens rejected his family business of buying and selling enslaved people and instead sought to raise a military force of enslaved men from the southern colonies with the promise of freedom after service.

Growing Up in the 18th Century: Did you know that 18th Century children were often given "small beer" to drink? This informational passage will help students to compare and contrast 18th Century and 21st Century meals, chores, toys, education, and more!

Meet Eliza Schuyler Hamilton: Eliza Schuyler Hamilton was truly the best of wives and best of women. In addition to preserving the legacy of her husband and founding father, Alexander Hamilton, she helped to found a desperately-needed orphanage and a free school. Even decades after Alexander's death, she was fiercely loyal to him, refusing to forgive 5th President of the United States, James Monroe, for his part in humiliating her husband.

Essex Hospital & Smallpox Inoculation: As 18th Century colonists moved toward revolution, they had to deal with more than England’s injustice. Deadly epidemics, like smallpox, raged from time to time, leading to fear and uncertainty. In 18th Century Marblehead, Massachusetts, a group of investors built a smallpox inoculation hospital on nearby Cat Island. That sounds like a great idea, right?!?

***BUNDLE Guidelines: I will ADD to this bundle every time I create a new History Snip-Its Product! However, I am making no future promises on when new products will be added. So, this bundle is priced for what it contains RIGHT NOW only. If you purchase this bundle, you will be able to download the updated bundle with new resources for free at any time!***

Visit my blog for fabulous resources and ideas: Thrive in Grade Five

You will love these resources:

Road to Revolution: The Colonies Unite- An Active, Engaging Unit

Constitution and Bill of Rights Bundle- 4 Excellent Products in One File!

Before I became a teacher-author, I wasn’t familiar with copyright law. You may not have the first clue about copyright and that’s ok! To simplify things, please understand that you have purchased ONE license to use this product in your classroom. This product belongs to me and is copyrighted under my name, so you may not share it freely, email it to coworkers, or upload it to any website, including your school website, district website, blog, or an educational-sharing site. I appreciate your consideration!

Total Pages
100+ pages
Answer Key
Included
Teaching Duration
N/A
Report this Resource to TpT
Reported resources will be reviewed by our team. Report this resource to let us know if this resource violates TpT’s content guidelines.