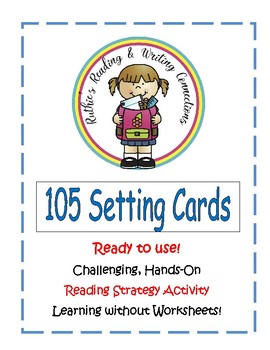 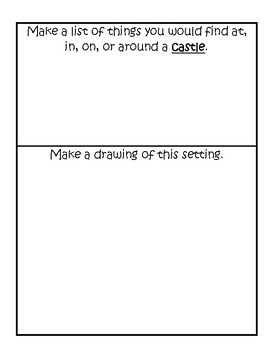 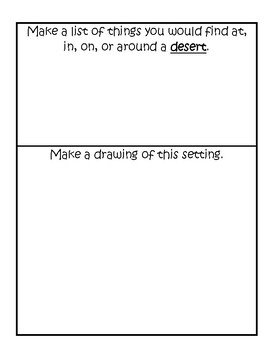 Why teach setting?: The setting of a story greatly influences what the characters do and how they think. It also helps to determine the plot and the mood or tone of the story. A story about two little boys going on a fishing trip with their father would be very different from a story about those same two little boys going to the mall with their father to buy a Mother’s Day gift for their mom. In the first scenario, you would expect to read about fishing, hiking, playing tag, or climbing a tree, while in the second story you would expect to read about the two boys picking out gifts, getting lost among the stacks of jewelry or pajamas, or even getting lost in the store. In the first story, you might see words like fun, excitement, or words describing the setting like beautiful trees, sunny day, or babbling brooks. In the second story you would expect to see words or phrases such as anxious, worried because they can’t find the right gift or about spending too much money. In both stories, the author attempts to paint a picture for the reader.

How to use these pages:

I use these setting cards in several ways. First, I give the same setting page to each of the students in the class. I ask them to write down all of the things or people that they might see in this setting. After about 5 or 10 minutes, I let them share their lists with an elbow partner (a student who sits to the right or left). Next, I place a blank page of this setting on the projector, and I write down all of the things which the students have written. I allow the students to add to their lists at that time. I really applaud those students who think outside the box or those who write an extensive list.

Next, I give each student a different setting card and ask them to make a list for the different settings. While the students are working, I walk around the class offering help to each child. I do not give them items to add to their lists. Instead, I ask questions to help spur and extend their thoughts. For example, for a setting card with a state fair, I might ask them to close their eyes and think of the things you might smell at the fair. What kinds of sounds might you hear? This should generate such things as hot dogs, cotton candy, and corn-on-the-cob, and also such sounds as children laughing and the sounds of the screaming from the roller coaster.

Other suggestions: I have the students one by one call out the things in their lists and let the class guess as to the setting where these things might be found. I also ask each child to write a short story about their setting, using as main character or characters someone you might see in this setting. You could also ask them to put themselves in this setting as the main character. Finally, you might ask the students to take a character from one setting and move to another setting. Ask them to explain how the story might change with this change in setting. I usually do this orally with the children. In this way, we usually can do two or three setting changes in just a few minutes.

Log in to see state-specific standards (only available in the US).
CCSSRL.5.3
Compare and contrast two or more characters, settings, or events in a story or drama, drawing on specific details in the text (e.g., how characters interact).
CCSSRL.4.5
Explain major differences between poems, drama, and prose, and refer to the structural elements of poems (e.g., verse, rhythm, meter) and drama (e.g., casts of characters, settings, descriptions, dialogue, stage directions) when writing or speaking about a text.
CCSSRL.4.3
Describe in depth a character, setting, or event in a story or drama, drawing on specific details in the text (e.g., a character’s thoughts, words, or actions).
CCSSRL.3.9
Compare and contrast the themes, settings, and plots of stories written by the same author about the same or similar characters (e.g., in books from a series).
CCSSRL.2.7
Use information gained from the illustrations and words in a print or digital text to demonstrate understanding of its characters, setting, or plot.
Total Pages
108 pages
Answer Key
N/A
Teaching Duration
1 hour
Report this Resource to TpT
Reported resources will be reviewed by our team. Report this resource to let us know if this resource violates TpT’s content guidelines.