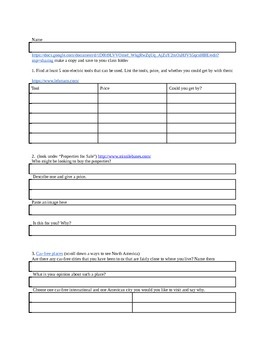 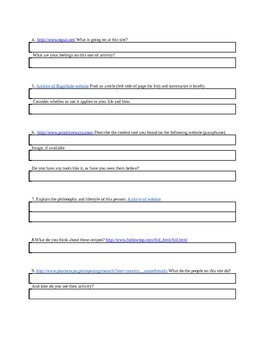 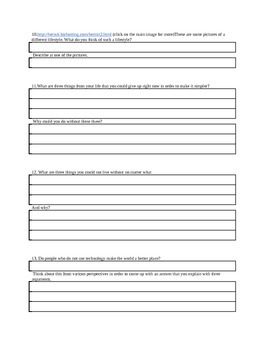 Educabana
73 Followers
Compatible with Digital Devices
The Teacher-Author has indicated that this resource can be used for device-based learning.

Some people make a choice to live a simpler life. Sometimes, the rest of us look at them as oddballs. This assignment, which was created a long time ago, was also kind of an oddball, since I could not find a place for it for every year. When I revised it, several links had to be updated, and some of the questions had to be changed to reflect how the world had changed.

The idea was that technology could become too much, maybe like in a dystopian Brave New World. Could we, as humans, avoid turning our lives into something negative if we concentrated on simplifying? It's interesting that when this assignment was first created, no one had smart phones. But the assignment still works, maybe even better than back then. (It's just a few questions and locations have changed--two sites are now on the Way Back Machine, one religious site had to be replaced by a Peace Corps site, and one site became a Wikipedia page.)

13 sections using 10 links, asking over 55 questions. This is a big websearch that probably should get more than one class period to be safe. Great for future-based sci-fi stories or Walden or any theme that has to do with Old vs New or Technology. This is not a green or liberal websearch. It's not just about volunteering or living as a poor person. Well balanced and interesting to students. What a webquest is supposed to be.