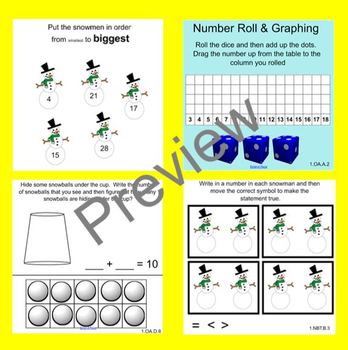 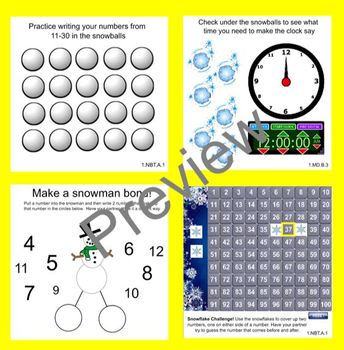 This is a Winter Smartboard Activity for 1st Grade. The activities included could be used whole group or as a math center during your math workshop time.

Activities:
*Ordering numbers from smallest to biggest and biggest to smallest
*Numbers that come before and after
*Writing numbers 11-50
*Addition and graphing
*Telling time to the half hour
*Missing addend
*Rote Counting
*Greater than, Less than, and equal to
*Adding 3 numbers and then double checking
*Teen numbers shown with a 10 and some 1's
*Numbers in the twenties shown with two 10's and some 1's
*Number bonds

CCSS that are included:

CCSS.Math.Content.1.OA.A.2 Solve word problems that call for addition of three whole numbers whose sum is less than or equal to 20, e.g., by using objects, drawings, and equations with a symbol for the unknown number to represent the problem.

CCSS.Math.Content.1.NBT.A.1 Count to 120, starting at any number less than 120. In this range, read and write numerals and represent a number of objects with a written numeral.

CCSS.Math.Content.1.NBT.B.3 Compare two two-digit numbers based on meanings of the tens and ones digits, recording the results of comparisons with the symbols >, =, and <

CCSS.Math.Content.1.MD.C.4 Organize, represent, and interpret data with up to three categories; ask and answer questions about the total number of data points, how many in each category, and how many more or less are in one category than in another.
Total Pages
21 pages
Answer Key
N/A
Teaching Duration
N/A
Report this resource to TpT
Reported resources will be reviewed by our team. Report this resource to let us know if this resource violates TpT’s content guidelines.