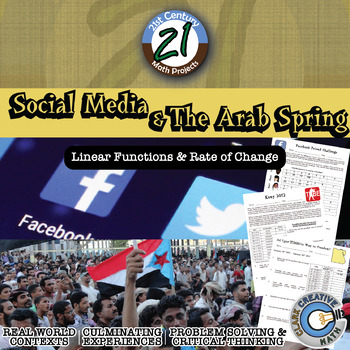 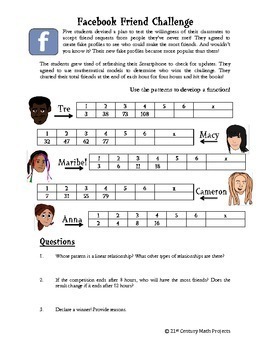 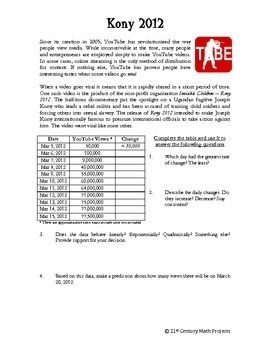 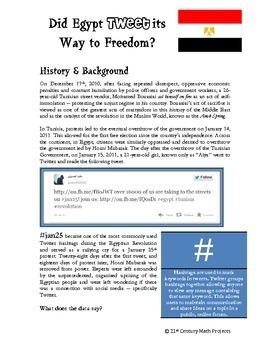 Facebook, Twitter, YouTube and Globalization in a 21st Century Math Project? That's what you have here. Patterns, algebra and functions get a facelift to the 21st century in this integrated international math project. Through mathematical modeling and regression, students are able to use authentic, relevant real world data to consider real world implications. This project would fit well in an Algebra 1 class (with a little guidance) or an Algebra II class.

In this project, you will receive three separate assignments.

1. "Facebook Friend Challenge" -- which focuses on finding patterns, comparing rates of change and projecting into the future.

2. "Kony 2012" -- this focuses on the mathematics behind a viral video. Providing a little background on the Kony 2012 video can give your math classroom an international, multi-disciplinary flair. In this assignment students with analyze a pattern, consider the rates of change, plot the function and make predictions about the future.

3. "Did Egypt Tweet Its Way to Freedom" -- focuses on a data analysis of Twitter tweets surrounding the Egyptian Revolution inside the 2011 world shaping Arab Spring. Students will analyze patterns, rates of change and consider the inquiry question. "Did Twitter play a role in the liberation of Egypt during the Arab Spring?" In this assignment students will compare mathematical rates of change with real world rates of change in international conflict.

Students will produce a timeline project that provides their stance on the inquiry question and uses mathematical evidence as support.

In this 22 page PDF, you will receive these three assignments as well as an answer key.

You may be interested in the following discounted bundles. SAVE $$$!

Total Pages
22 pages
Answer Key
Included
Teaching Duration
4 days
Report this Resource to TpT
Reported resources will be reviewed by our team. Report this resource to let us know if this resource violates TpT’s content guidelines.

Log in
to see state-specific standards (only available in the US).
CCSSHSS-ID.C.7
Interpret the slope (rate of change) and the intercept (constant term) of a linear model in the context of the data.
CCSSHSF-LE.B.5
Interpret the parameters in a linear or exponential function in terms of a context.
CCSSHSF-LE.A.1
Distinguish between situations that can be modeled with linear functions and with exponential functions.
CCSSHSF-BF.A.1
Write a function that describes a relationship between two quantities.
CCSSHSF-IF.C.9
Compare properties of two functions each represented in a different way (algebraically, graphically, numerically in tables, or by verbal descriptions). For example, given a graph of one quadratic function and an algebraic expression for another, say which has the larger maximum.