Solfa Wars {A Bundled Set of MP4, Interactive PDFs and Flashcards for Melody} 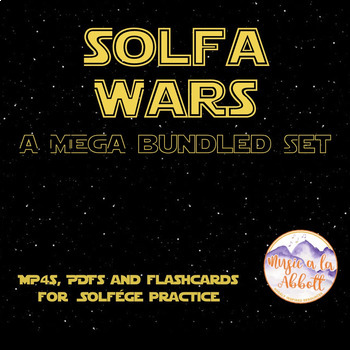 It’s SOLFA WARS!!! Similar to my best selling Rhythm Wars , this will be a set of MP4 files for practicing solfa patterns found in common folk songs! Students will have opportunities using the preparation materials provided to practice the patterns and then get a chance to read and sing them as they scroll the screen in sequenced games.

There are be TEN different sets of games within this file, with the following note sets:

high do (contains do-mi-so-la-high do)

What’s included with each set:

• MP4 files that will run though Quicktime or iTunes

o Two will be only 5 patterns in the game, with the solfa names given in a vocal prep, in two different keys

o Two will be multiple patterns with the solfa names given in a vocal prep, in two different keys

o Two will be multiple patterns with a vocal pattern on “loo” as a vocal prep, in two different keys

o Two will be multiple patterns with a vocal starting pitch as a prep, in two different keys*

• Flashcards for practicing the patterns with game extension ideas included.

*** Also included is a link to a Google Drive folder from which you can view ALL the MP4 files WITHOUT having to download the MP4s. This will save you TONS of TIME!!! And provide you with the ability to view them immediately upon purchasing rather than downloading the MP4's from Dropbox (which is still included, so you have both options.)

This also empowers you to use them more easily on iPads!

The staff notation for the games will be written primary in the keys of C-do, F-do and G-do with high do having a game in the key of D-do so that it is pitched appropriately for treble singers.

The starting pitches for the so-mi games will be indicated by a letter representing the starting solfa. The other games will use the do-clef to indicate the key

** Please note the vocal ranges of the games will range from C4-E5.

Camp Songs for the Classroom