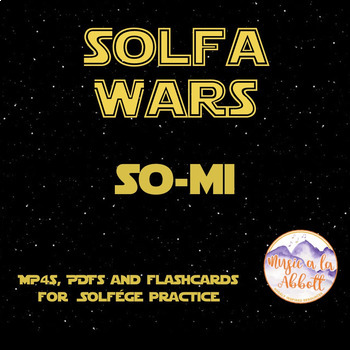 It’s SOLFA WARS!!! Similar to my best selling Rhythm Wars , this will be a set of MP4 files for practicing solfa patterns found in common folk songs! Students will have opportunities using the preparation materials provided to practice the patterns and then get a chance to read and sing them as they scroll the screen in sequenced games.

This set of games is included in the Solfa Wars Bundled set. If you own that set you own this set! If you like this file the bundled set end up saving you a lot of money!!!!

The staff notation for the games are written primary in the keys of C-do, F-do and G-do with high do having a game in the key of D-do so that it is pitched appropriately for treble singers.
The starting pitches for the so-mi games will be indicated by a letter representing the starting solfa. The other games will use the do-clef to indicate the key

** Please note the vocal ranges of the games will range from C4-E5.