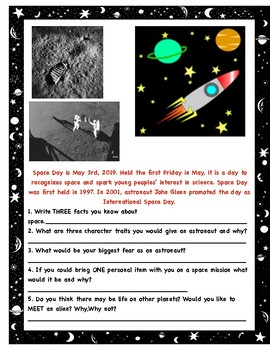 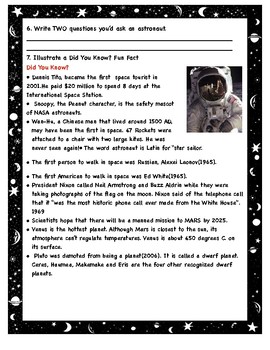 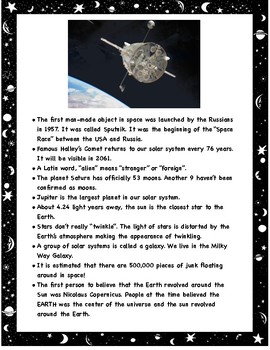 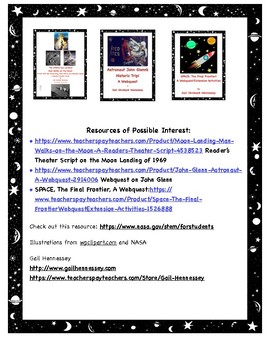 Space Day is the first Friday in May. It was started in 1997 to highlight space and to spark an interest in science among young people. John Glenn promoted the day as International Space Day. Possible Interactive Notebook Activity.

Use this Space Interactive Notebook Activity any time of the year, for a unit on space, for a Friday activity, before a vacation or on Space Day!

1. The Eagle Has Landed. Man Walks on the Moon, A Reader’s Theater Script. After 76 days, Neil Armstrong, Buzz Aldrin and Michael Collins, the astronauts for the historic Apollo 11 mission to the moon, made history on July 20, 1969. After the Columbia reached the moon’s orbit, Armstrong and Aldrin went into a smaller module, the Eagle. They began a descent onto the surface of the moon and successfully landed on the moon where both men would become the first humans to actually walk on the moon. The date was July 21, 1969! Just think, from the first powered flight in 1903, it was just 66 years before we had humans walk on the moon! Part of my Ms. Bie Ografee Talk Show Series, Armstrong, Aldrin and Collins are guests of Ms. Bie Ografee and her studio audience ask the guests questions about their historic trip to the moon. In addition to the play, with 10 audience questioners, there are Did You Know Fun Facts, comprehension questions, a teacher page with extension activities and the key to the comprehension questions: https://www.teacherspayteachers.com/Product/Moon-Landing-Man-Walks-on-the-Moon-A-Readers-Theater-Script-4538523