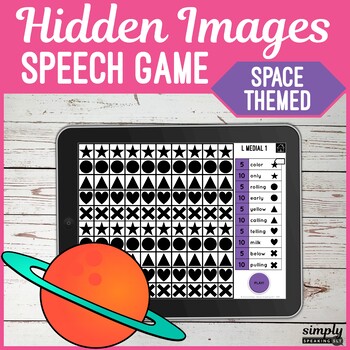 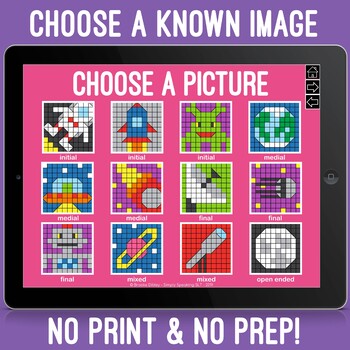 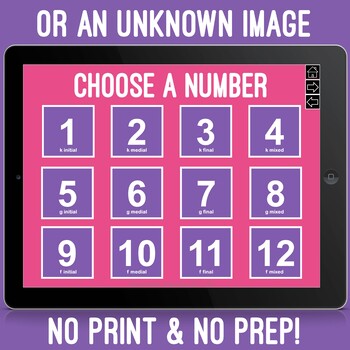 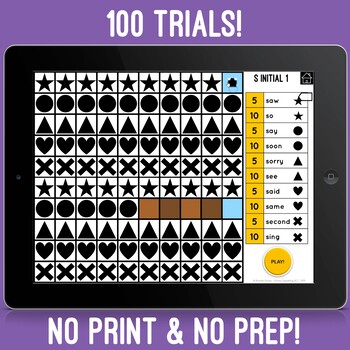 Simply Speaking SLT
10.6k Followers
Follow
Compatible with Digital Devices
The Teacher-Author has indicated that this resource can be used for device-based learning.

Getting in 100 speech trials has never been so fun! In this engaging digital PowerPoint game, students uncover space-themed hidden images as they say their speech sound 100 times.

Press the play button and watch as the arrow moves up and down the sound loaded high-frequency word list. Press the button again and the arrow will stop on a word, a symbol and a number (either a 5 or a 10). This number reveals how many times your student needs to say the word, as well as how many symbol squares they can uncover on the hidden image. By the time your student has uncovered the entire image, they will have said their speech sound 100 times!

➜ The same 12 images are used for multiple sounds across the game. However, no 2 images are the same in a phoneme set. e.g. all 12 images that target the L sound are different.

➜ This interactive game is no-prep and opens in PowerPoint on computers and iPads, making it great for in-person therapy and teletherapy.

➜ Using digital products can save you so much time and money. But they can also come with a learning curve. That’s why I have included in-depth tutorial videos. The tutorials are also linked below.

Before you buy, PLEASE check out the provided preview document/video so you can see how this works. Please also read the important info below!

⚠️FILE TYPE: Microsoft PowerPoint Presentation. This download is a digital download, it is not intended for printable use.

⚠️COMPATIBLE DEVICES: At time of upload this file type opened and functioned, as intended, in the most recent versions of:

***free to download and use, no sign-in needed because this is a read-only file.

There are 2 PowerPoint files included. One will work in PowerPoint 2013 but CAN NOT be split-screened on a computer. The other file type is for those using PowerPoint 2016 and later, this can be split screened following the tutorial instructions provided.

Did you know you can get the most up to date PowerPoint software for FREE if you work for a school??? Check out this link for more info.

⭐Psssst!! I also have a free spinner set for the /s/ sound. Check it out here.

Click the green star ★ above to follow my store. I often upload products similar to this one and I don't want you to miss out!

If you enjoy this product, please leave positive feedback to gain credits you can use towards future purchases! Find out more here.

If you have any questions or problems, please message me on social media or email me at simplyspeakingslt@gmail.com