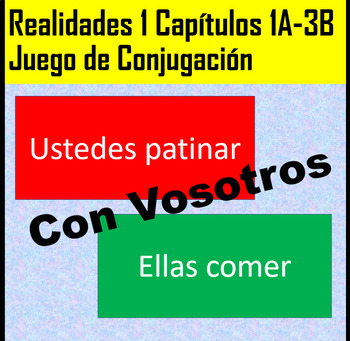 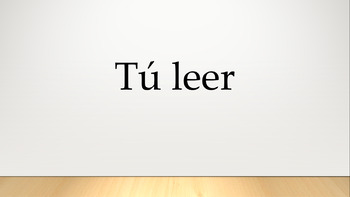 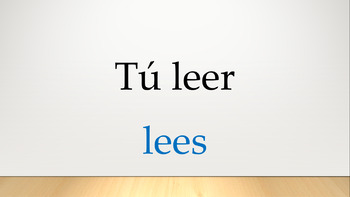 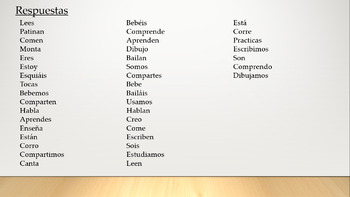 This resource has 85 slides: TOU, title slide with directions, 41 slides with subjects (some pronouns and some nouns/proper nouns) and verbs (such as Yo dibujar, Luis comprender, Nosotros escribir), an answer slide after each one with the conjugated verb added (dibujo, comprende, escribimos), and an answer slide at the end with a list of all the answers in order. The verbs are ones that students should know from Realidades 1, chapters 1A-3B. It includes -ar, -er, and -ir verbs and a good balance of pronouns, including vosotros/as. If you need the version without vosotros, please click here: Conjugation Game 1A-3B sin vosotros

All of the verbs are regular except for "estar" and "ser." The last slide has all of the answers so that you can print it and give it to student "judges." (I made the last thumbnail of the answer slide, so you can see which verbs I've used before you buy.) Please look at the preview to get an idea of what's in the game. I do delete some slides to discourage plagiarism.

To play, I explain the rules, give out the boards/markers/erasers, choose judges and give them answers, and do one for practice. Then I tell them that we're starting for real, say, "tres, dos, uno..." and change the slide. Students will talk to each other, write the conjugated verb, and hold the board up until we've seen everyone and two teams get points. If there are any that they struggle with, I take a minute to explain why it is what it is. At the end, I usually give the winning team candy. :)

Check out my similar game to practice adjective vocab and agreement from Chapter 1B: 1B Vocab Adjective Agreement Game AND my worksheet to practice conjugation of -ar, -er, and -ir verbs: Verb Conjugation worksheet con vosotros