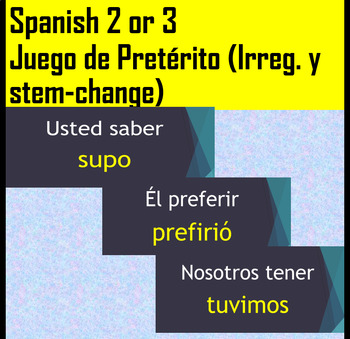 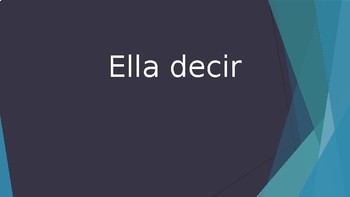 This resource has 61 slides: TOU, title slide with directions, 29 slides with pronouns and verbs (such as Ella mentir, Yo estar, Ustedes poner), an answer slide for each, and an answer slide with all of the correct answers in order. Verbs included are: poder, pedir, morir, poner, saber, hacer, mentir, querer, ser, ir, competir, dormir, traer, tener, servir, estar, repetir, preferir. It includes a good balance of pronouns (excluding vosotros). In order to play, students need to be familiar with the e to i and o to u preterite stem changes in boxes 3 and 6 and common irregular preterite verbs. This resource was made primarily for Spanish 2 students, but it could also be used for Spanish 3 students who need a refresher at the beginning of the year.

To play, I explain the rules, give out the boards/markers/erasers, choose judges and give them answers, and do one slide for practice. Then I tell them that we're starting for real, say, "tres, dos, uno..." and change the slide. Students will talk to each other, write the conjugated verb, and hold the board up until we've seen everyone and two teams get points. If there are any that they struggle with, I take a minute to explain why it is what it is. At the end, I usually give the winning team candy. :)