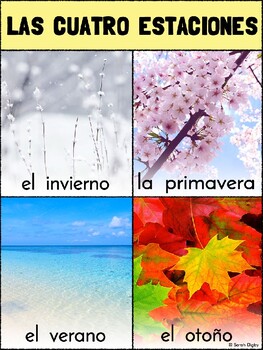 Spanish poster of the four seasons/las cuatro estaciones – perfect for any early, bilingual, or language-learning classroom to help students connect real-life pictures of the to the changing seasons. Real pictures also make the poster ideal for older SIFE, EL/ELLs, and emergent bilinguals/multilinguals.

The file is large enough to be blown up as a full-size poster, but it can also serve as individual handouts for students to refer to at their own discretion depending on student need.