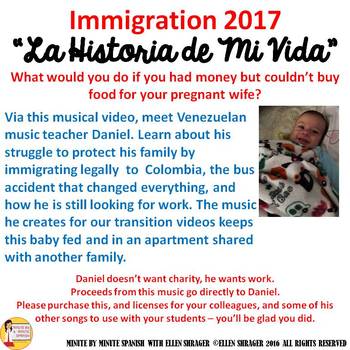 Teach your students that immigration is not something that just happens at the Mexican border, or in the movies Sweet 15 and Bajo la Misma Luna. Daniel is currently scrambling to feed his family and to stay in an apartment he shares with another family. Your purchase of his song directly helps him to feed his family – most days they have one meal of bean soup. Rice is a special treat a couple of times a week.

As a teacher, Daniel's story horrifies me. One year he is teaching music, living with his family in their apartment, praying for a miracle that he and his wife can have children, the next moment, the Venezuelan economy forces his school to close and he can't find work. He started making music and selling it over the internet when his prayers were answered and his wife became pregnant.

But in the summer of 2016, even with dollars, they couldn't find food for his wife and the doctor told them that the pregnancy was not thriving and in danger. Daniel moved his wife to live with relatives in Colombia, as her mother was born there and thus is entitled to citizenship. Daniel prepared to join his wife and immigrate to Bogotá, leaving his supportive extended family and taking his mother with him.

That decision had so many unexpected consequences because when their bus crashed after they crossed the border and were near their destination, his mother’s skull injuries needed to be fixed in surgery to save her life. In a new country, on tourist visas, without medical care, all of the money intended to support them during the transition was used up in medical care and Daniel incurred debt just to keep his mother alive.

When asked why he brought his mother with him, he explained that he lived in a family apartment in Venezuela. He and his wife had one bedroom, his sister and her husband and two daughters shared another bedroom, his single sister and mother another bedroom. When there was so little food available for them to eat, his mother would make sure her children and grandchildren would eat and she spent days in her room crying from hunger. She also needed daily medicine that was no longer available. So it made sense she could help the young family with the baby and have the medical help and food that she couldn’t find in Venezuela.

Prior to his leaving in September of 2016, Daniel would tell me of all the funerals he attended. Because of the economic crises, his diabetic uncle could no longer find insulin to purchase and died. His relatives with heart conditions and high blood pressure, died because they couldn’t find medicine that here in the United States we take for granted. The other people who provide music and graphics and videos all reported the same thing – so many middle aged people dying young because of the lack of medicine available in Venezuela at the time.