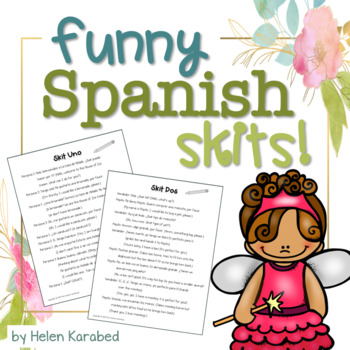 In this bundle, your students will bring 9 original Spanish skits to the "stage!" These scripts are written for beginner to intermediate Spanish speakers with background knowledge of Spanish food vocabulary + basic conversation. Students will practice using gustar, estar, and poder, as well as tener expressions. I wrote these Spanish Reader's Theater scripts for my students to practice dialoguing in real, and not so real, life situations!

Note: Most of the skits are for pairs or groups of three, except for the Las Posadas Readers' Theater which has parts for 15+ students. In the Christmas Skits, the first skit has two parts for Rudolph and Prancer, and the second skit has three parts for Rudolph, Prancer, and Santa! The dialogue is comfortable for beginner to intermediate Spanish speakers. You can also assign roles according to fluency.