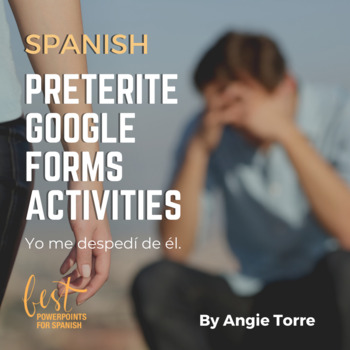 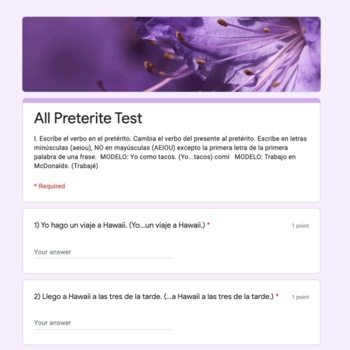 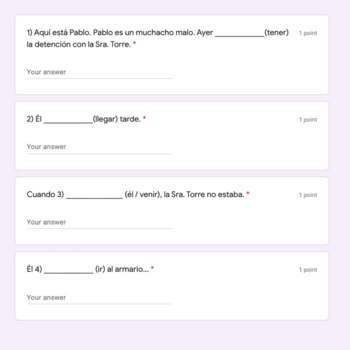 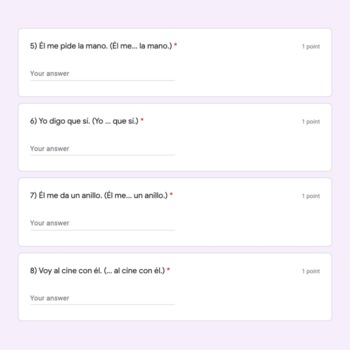 Students practice the preterite tense of regular and irregular AR, ER, IR verbs with four fun stories and conjugation activities. They complete the cloze sentences for the stories and write the correct form of the pretérito for the given verbs in the other exercises. These are no prep, self-correcting, editable activities that can be used as assessments, digital worksheets, or any activity. Besides guiding students to communicate in the past, the stories provide comprehensible input. Spanish Grammar

THIS PRODUCT INCLUDES THE FOLLOWING RESOURCES:

FIRST STORY: I take a trip to Hawaii, get engaged, watch a terrible movie, lose my ring, find it before I have to tell my fiancé, get married. Students rewrite the sentences, changing the verbs from the present tense to the preterite tense.

SECOND STORY: Pablo got detention. While he was there, he stole a test from the cabinet. He and a friend used the test to cheat. The teacher found out and changed the test. They both failed. The teacher smiled. (Sonrió)

Students complete the sentences by writing the given verb in the preterite tense with the correct conjugation: Él ______ (llegar) tarde

THIRD STORY, "Mi ex-novio": I went to a restaurant with some friends. While there, I saw my boyfriend with another girl. He tried to say she was just a friend. I left him. A few months later he married the "friend." (Not a true story.)

Students complete the sentences by writing the correct form of the given verb.

Students complete the sentences by writing the correct form of the irregular preterite of the given verb.

This activity provides immediate feedback when students commit errors. It is not set up as a quiz but you can change that. 20 questions

★These activities are included in the following money-saving bundles: