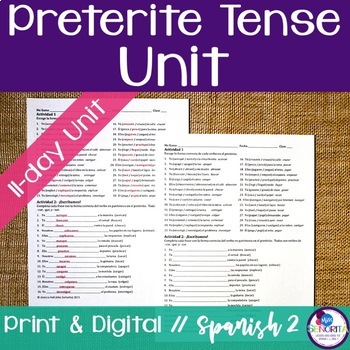 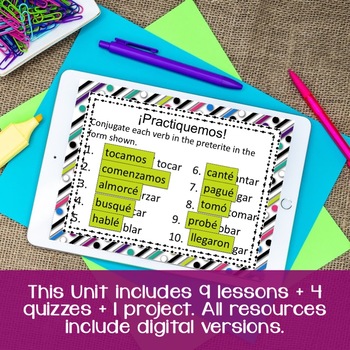 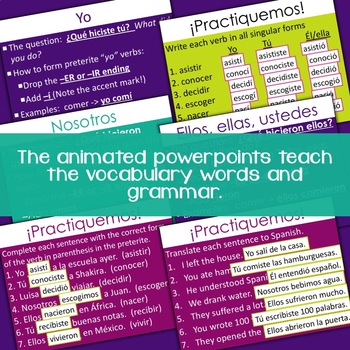 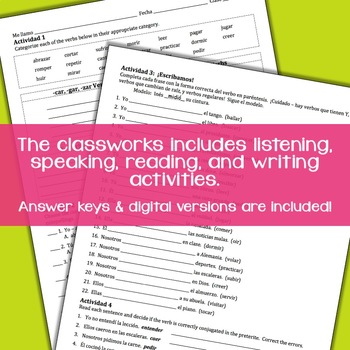 Products in this Bundle (14)

This bundle includes everything you need to teach a preterite verb unit from beginning to end! Each lesson includes links to Google Classroom-ready versions of the powerpoint, notes, and classwork as Google Slides. Students can type directly into textboxes on the notes and classwork activities. The quizzes are included as Google Forms, which are self-grading. The project is also included on Google Slides for distance learning.

This is a zip file including 9 lessons, 4 quizzes, 2 homework assignments, and 1 project:

The powerpoints teach each verb group's endings in the preterite tense and provide students with practice. Each powerpoint includes animation. Each notes page follows along with its powerpoint and has blanks in it where students have to fill in words. They can refer back to their Notes later in the class period or a few days later to study! Each powerpoint is saved as both .ppt and .pptx.

The notes pages, writing activities, homeworks, and quizzes are all saved as both editable Word docs and PDFs. Answer keys are included.

-multiple choice: choose the correct form of the verb in the preterite

-translate English to Spanish in the preterite

Be sure to check out the preview!

Total Pages
341 pages
Answer Key
Included
Teaching Duration
2 Weeks
Report this Resource to TpT
Reported resources will be reviewed by our team. Report this resource to let us know if this resource violates TpT’s content guidelines.