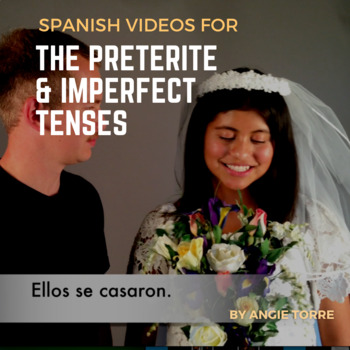 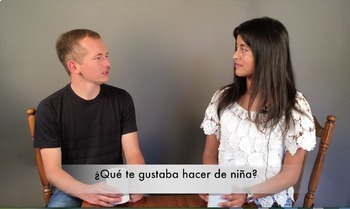 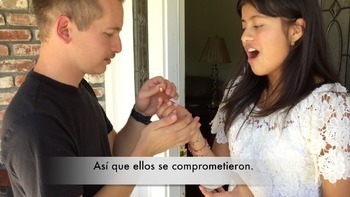 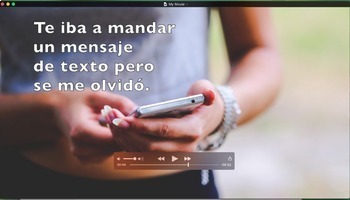 What’s better comprehensible input than conversation with a native speaker? Videos of native speakers with Spanish subtitles AND overlaid visuals and animation to aid in comprehension, with music and corresponding activities for recycling and repetition of vocabulary and concepts.

→To see a sample of each of the seven videos, click here:

VIDEOS WITH MOSTLY THE IMPERFECT:

~La amiga: Video Story of how Gloria and Enrique met and fell in love. Enrique had loved Gloria for a long time but was too shy to ask her out. Finally, he asked her out and they found out they had many things in common and began spending all their free time together. Then, one day something awful happened to threaten the relationship. This video uses the imperfect tense multiple times in context as well as the vocabulary commonly used with the imperfect tense. The preterite is also used as it is assumed students will have already studied the preterite.

~Cuando era niña Video of Jessica talking about what she used to do as a child with many examples of the imperfect tense used in context as well as overlaid images and music.

~Script of the story, vocabulary and two activities with the answers: comprehension questions and write what you used to do as a child.

~Iba a + infinitivo: Video of Jessica talking about what she WAS GOING to do (iba a + infinitivo) with visuals and subtitles. Includes the script, vocabulary, and a follow-up activity.

VIDEOS THAT INCLUDE THE PRETERITE AND THE IMPERFECT:

~El caballo: Video of Jessica talking about something that happened to her when she was a child. Includes the script, vocabulary, and two activities in which students answer comprehension questions and underline the imperfect tense in one color and the preterite in another.

~Los globos: Video of Rodrigo talking about a volleyball game his father played in Mexico and what his team did for revenge when they lost. Includes a script, vocabulary, and an activity in which students complete the sentences.

~Los huesos: Video of Melanie talking about what her grandmother discovered when she built her house. Includes vocabulary, script, comprehension questions and answers.

~Cuando tenía tres años Video about a scary episode that occurred to Jessica when she was three years old. Includes the vocabulary, script, Cierto / Falso Activity and comprehension questions.

~Vocabulary list of words commonly used with the imperfect tense (41 nouns, 31 verbs, 8 expressions). Many of these words are ~used in the videos.

~Google Slides digital versions of all activities for use in Google Classroom, other Google and digital platforms, and distance learning

These videos will be sent to you via DROPBOX or WeTransfer. Both are free.

THESE VIDEOS ARE INCLUDED IN THE FOLLOWING MONEY-SAVING BUNDLE: Spanish Videos for Comprehensible Input