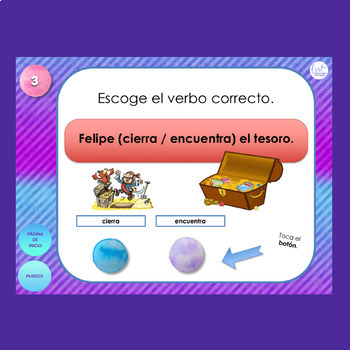 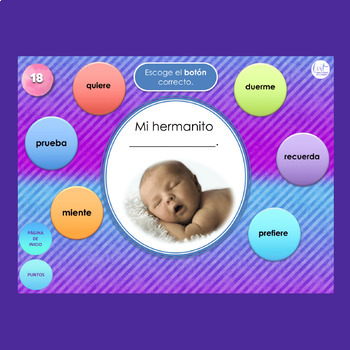 Students read and complete the sentence by choosing the correct verb. If they choose the correct stem-changing verb, they are congratulated; if not, they are told to try again. Students get instant feedback – no correcting necessary! These activities are not only fun but they provide comprehensible input of Spanish stem-changing verbs because even the incorrect verbs are spelled and conjugated correctly and the visuals aid in comprehension. This resources is great for online or distance learning because it is self-correcting!

~26-slide Stem-changing Verbs Interactive PowerPoint Game for Spanish Two in which students complete the sentences by choosing the correct verb from among two, three, four, and six choices

~26-slide Stem-changing Verbs Interactive PowerPoint Game for Spanish Three in which students complete the sentences by choosing the correct verb from among two, three, four, and six choices.

~Student handout with the list of 44 stem-changing verbs, their English translation, and use in context for Spanish Two

~PowerPoint Answers to both games

~PowerPoint vocabulary students need to know to play the game

THESE ACTIVITIES ARE INCLUDED IN THE FOLLOWING MONEY-SAVING BUNDLE: Spanish Google Drive Activities

Total Pages
66 pages
Answer Key
Included
Teaching Duration
40 minutes
Report this Resource to TpT
Reported resources will be reviewed by our team. Report this resource to let us know if this resource violates TpT’s content guidelines.