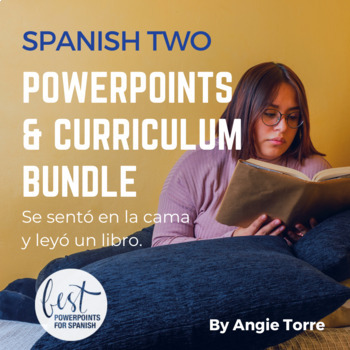 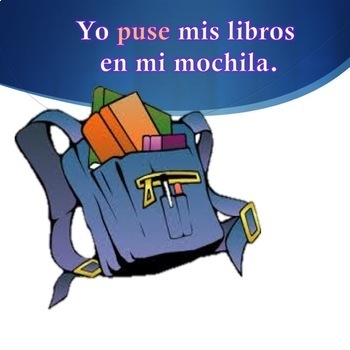 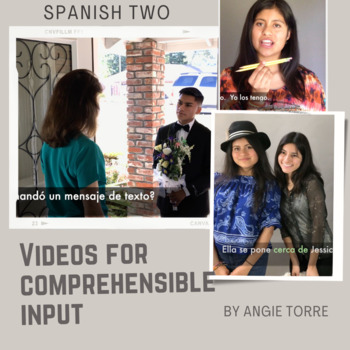 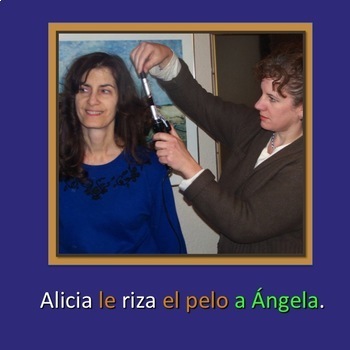 Save $90 by buying all the Spanish Two materials in one bundle!! That's over 30% off! Everything you need to teach Spanish Two is in this bundle: PowerPoints, TPR Stories and comprehensible input, homework, tests and quizzes, VIDEOS, interactive notebook activities, Google Drive Activities, Student Handouts, bell ringers, competitions, games, and digital versions for 1:1 classrooms and distance learning.

This, “Spanish Two PowerPoint’s and Curriculum Bundle” has 4,316 PowerPoint slides, 1,065 documents (Word, pdf, jpeg), and 18 videos. Most PowerPoints are complete lessons with instruction, check for understanding, guided practice and closure.

I have been teaching Spanish for 30 years.

Last year, my principal nominated me for Teacher of the Year.

I wrote and facilitated numerous workshops for beginning and veteran teachers, in and outside of my district, on lesson planning, classroom management, instructional strategies, TPR Storytelling, How to Teach Grammar in the Target Language, Equity, Strategies for Visual Learners and more.

I am one of the top sellers in the High School Category.

HERE'S WHAT SOME OF MY BUYERS HAVE SAID ABOUT THIS CURRICULUM:

Very useful. Much more engaging than a worksheet.

The bundle includes the following materials:

~Rubrics for all activities

~Frases útiles: review of phrases students should know how to say

~Infinitivos PowerPoint for Spanish One

***SPANISH TWO CURRICULUM includes some of the following***

~Power Point on the Personal A in Spanish

~TPR Story using the Personal A in Spanish Personal A Activities, TPRS, PPT

a. Competition in which students complete the sentences by changing the present tense to the preterite tense.

b. Competition in which students complete the sentence by changing the infinitive to the preterite.

c. Power Point Competition in which students write sentences changing the verb from the present tense to the preterite.

e. Homework in which students answer the questions, fill in a cloze story with -ir Stem-Changing Verbs.

i. Verb Chart demonstrating how the present stem changes but not the preterite for -ar/-er verbs, but DOES change for -ir stem-changing verbs.

j. Practice in which students complete the sentences with the correct -ir stem-changing verb

d. Paired Speaking/Writing Activity in which students ask each other questions using the irregular preterite

e. Irregular Preterite Song on Power Point with audio (me singing-sorry); words to the song and instructions for activity in which students sing the song and act out the verbs

j. Pude / Podía homework in which students practice the difference between the preterite and the imperfect of some verbs. Power Point answers to pude / podia homework.

k. Quiz on the irregular preterite

f. Competition in which students write sentences changing them from present to preterite

k. Power Point Competition in which students change the sentences from present to preterite of stem-changing verbs

~Review of Spanish One: IR + A + INFINITIVO

~Spanish Video for the PRESENT PROGRESSIVE

THE FOLLOWING VIDEOS MUST BE ACCESSED THROUGH DROPBOX OR GOOGLE DRIVE.

~ Google Slides and autocorrecting Google Forms digital versions for use in Google Classroom, other Google and digital platforms, and distance learning

THESE RESOURCES ARE INCLUDED IN THE FOLLOWING MONEY-SAVING BUNDLE: Spanish One, Two, and Three PowerPoints and Curriculum Megan Bundle

AND THIS BUNDLE: Spanish One, Two, Three, and Four PowerPoints and Curriculum Bundle

THIS SPANISH TWO BUNDLE WILL BE SHARED WITH YOU VIA DROPBOX AND GOOGLE DRIVE.

Spanish One PowerPoints and Curriculum Bundle