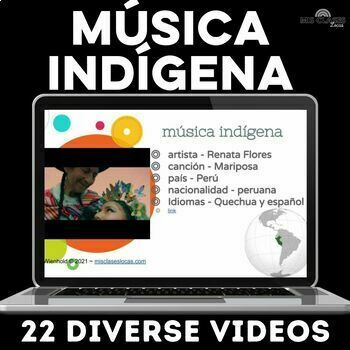 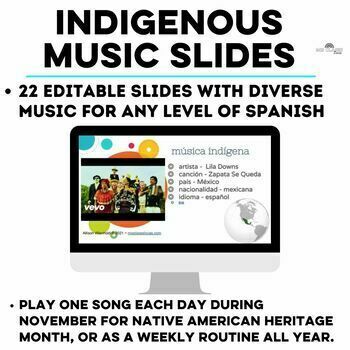 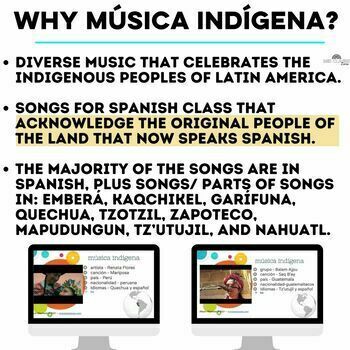 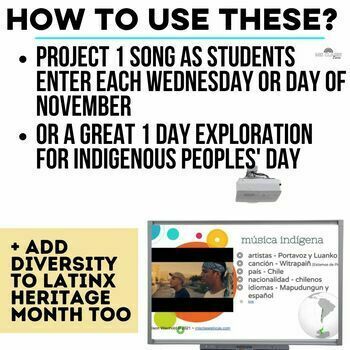 Mis Clases Locas
7.6k Followers
Follow
Made for Google Drive™
This resource can be used by students on Google Drive or Google Classroom. To access this resource, you’ll need to allow TpT to add it to your Google Drive. See our FAQ and Privacy Policy for more information.

On each of the 22 Editable Google Slides

✅ title of the culture-filled song

✅ language(s) of the song

✅ map of the country of origin

✅ songs that could be used in Spanish 1, Spanish 2, Spanish 3, Spanish 4 & Exploratory Spanish as a classroom management routine.

What is música indígena Indigenous Music in Spanish?

⭐ 1 song for each day of school during November, Native American History Month

⭐ diverse music that celebrates the Indigenous People of Latin America

⭐ music with prehispanic instruments or Indigenous influence on the music itself

⭐ songs in Spanish, plus Emberá, Kaqchikel, Garífuna, Quechua, Tzotzil, Zapoteco, Mapudungun, Tz’utujil, and Nahuatl. *Pease note there are songs included that are not in Spanish, but rather the languages above with the goal of showing the rich diversity of the land that is now known as Latin America.

Please note you must have access to Youtube to play the songs and there is a playlist of songs included. They can be used as a quick 5-minute bell ringer as a classroom management routine or expanded on for much longer using your own additional resources. *Please note there are no activities included for the included songs* This is an editable Google Slideshow.

What are other teachers saying about similar resources of diverse music?

⭐⭐⭐⭐⭐Love (Mis Clases Locas) resources. I have purchased many of them and they never disappoint - Maria G (9th-10th grades)

⭐️ Bundle & save for a discount ⭐️

Have difficulty with a file?