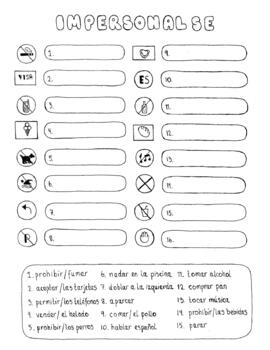 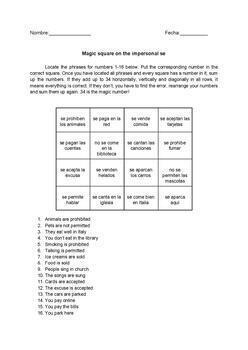 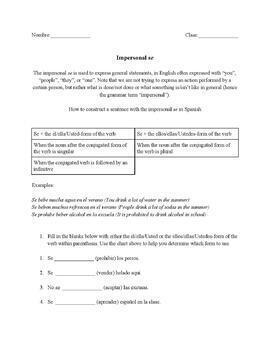 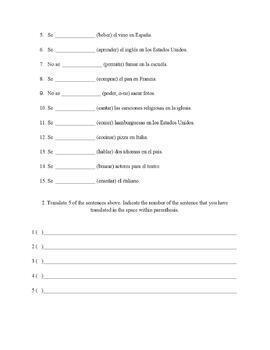 Save money (20 %) and time with this bundle! I created these worksheets after having difficulty finding worksheets on the impersonal se that were clear and concise and didn't confuse the students with too difficult vocabulary or confusing it with the passive voice. These worksheets have been carefully constructed to not require any prep, you can just print them and hand them out! This bundle contains the following 3 worksheets:

The students write sentences based on signs and sentence prompts, using the following 3 varieties of impersonal se:

The students are presented with a basic explanation of what the impersonal se is, and a chart for when to use se + the él, ella, Usted-form vs when to use se + the ellos, ellas, Ustedes-form, as well as some clear examples of when to use which. They then proceed to conjugate 15 verbs (fill in the blank), using the chart to determine which form to use. They have to analyze the sentences to figure out if:

1. the noun after the conjugated form of the verb is singular (use se + the él, ella, Usted-form

2. the conjugated verb is followed by an infinitive (use se + the él, ella, Usted-form)

3. the noun after the conjugated form of the verb is plural (use se + the él, ella, Usted-form

Students then translate 5 sentences of their choice to help them get a sence of the meaning of these types of statements.

I have created the worksheet in a way which doesn't require any prep. It's a no frills, clear, copy and hand out kind of worksheet (once you've explained the basics through a powerpoint or other type of presentation).

Students locate 16 phrases containing the impersonal se (either with the impersonal se + 3rd person singular due to singular noun, impersonal se + 3rd person plural due to plural noun or impersonal se + 3rd person singular due to verb) and put the corresponding number in the correct square. Once they have located all verb forms and every square has a number in it, they sum up the numbers. If the numbers add up to 34 horizontally, vertically and diagonally in all rows, it means everything is correct. If they don't, they have to find the error and correct it so that the numbers add up to 34. 34 is the magic number! My students love solving magic squares, it's a fun, self-correcting exercise that is just challenging enough. Best of all, it doesn't require any prep! It's also the perfect homework, that your students will actually want to do.