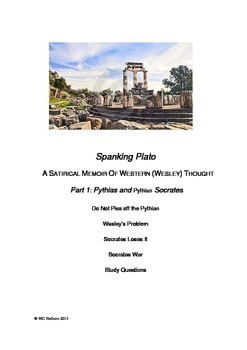 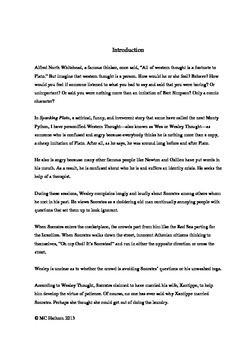 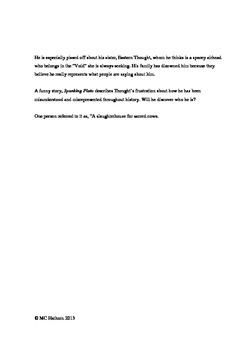 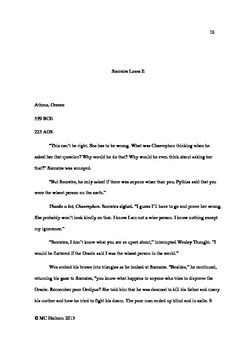 In Spanking Plato, a satirical, funny, and irreverent story, I have personified Western Thought—also known as Wes or Wesley Thought—as a man who is confused and angry because history considers him a mere footnote to Plato. After all, he says, he was around long before Plato. Many famous people, like Aquinas and Aristotle, have irritated him further by putting words in his mouth that misrepresent his ideas. As a result, he is confused about who he is and suffers an identity crisis. He seeks the help of a therapist.

During these sessions, Wes complains at length and loudly about Socrates, for one, whom he views as a doddering old man who continually annoys people with questions that set them up to look dumb.

A cynical story, Spanking Plato describes Wesley Thought’s frustration about how he has been misunderstood and misrepresented throughout history. Will he discover who he is?

One person referred to, Spanking Plato as, “A slaughterhouse for sacred cows.” Another said it was the next Monty Python.

Following is a partial list of the table of contents for Spanking Plato:

Do Not Piss Off the Pythian

Plato: A Ring, a Cave, and a Toenail

Aquinas: The Banquet and Night Flight

Therapy Session: Scenes from a Mall

Therapy Session: The Apple of my Eye

The Scientific Revolution continued and The Rise of Capitalism

Adam Smith: All Buttoned Up? Not!

Therapy Session: Coming Out of the Closet

Interlude: Day 2
Your Money or Your Life

Locke: Coming through the Rye

Therapy Session: Fire in the Hole!


Future sets include Voltaire, Rousseau, Jefferson, Hamilton, Hegel, Marx, and many others.

It is not necessary to get each section. You can skip around and choose which section best meets your needs.


Below is the Study Guide at the end of Section 1, Pythias and Socrates

1. The Oracle at Delphi cannot lie because she represents Apollo, the god of truth. Yet everyone knows her prophecies are confusing and misleading. Are these kinds of prophecies a form of lying? Why or why not?

2. Socrates hated the poets because he felt they were distracting people from seeking truth. Is there a modern counterpart to the poets? Who or what are today’s poets? What are they trying to accomplish?

4. According to Thought, the Greek word Aretê has been mistranslated into the word “virtue,” whereas the more accurate meaning is “excellence.” What are the differences between the translations? Do you know anyone who is an example of Aretê?

5. Socrates claims that if there is an afterlife, he will continue questioning as he always has. Is Socrates practicing a form of civil disobedience? Is so is it valid?

6. Why was Socrates so disturbing to Athens? He was only an old man asking questions. What harm was he doing? Do you know anyone whose questions annoy or trouble others? In Julius Caesar, a play by William Shakespeare, Caesar says to Marc Anthony, “Yond Cassius has a lean and hungry look. He thinks too much. Such men are dangerous.” Why do the powerful fear questioning? Was Caesar justified in his fears? Was Athens justified in its fears? What are the similarities and differences between Socrates and Cassius?

7. Socrates was executed for corrupting the youth of Athens. Is there anyone today who claims that our educational system corrupts our youth? If so, who are they? What are their complaints? Evolution? Intelligent design? Humanism? Are their accusations justified? Although we don’t execute teachers or other school officials, at least not yet, how do these complainers handle their frustrations?

8. Special project: Form two teams from your class. One team will be the prosecutor against Socrates. The other team will defend Socrates. One person will act as Socrates. The class will present a trial to another class who will serve as the jury. The jury will vote on the charges and determine the guilt or innocence of Socrates. Note: if you wish, replace Socrates with another controversial issue or lightening rod in the community or in your school.