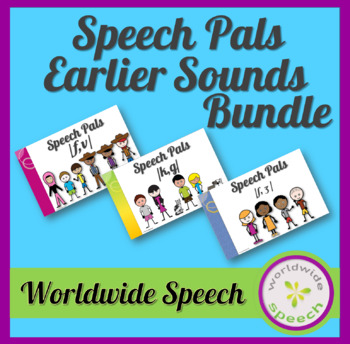 Speech Pals are no-print must-haves for articulation therapy, either in-person or virtual, for both readers and non-readers. You and your students will love these fun, no-prep PowerPoint activities, as they practice their speech sounds at the word level, in short sentences, and in long sentences with multiple targets. Repetition is the key to success in the production of new phonemes. So with Speech Pals each phoneme is targeted 58 times per word position! (ʒ is the exception, as all positions are combined, for a total of 58 productions.) The characters in Speech Pals are diverse and often find themselves in humorous situations. Also, various parts of speech are represented by the target words, rather than just nouns, as are typically seen in articulation therapy materials.

Each target sound is represented by a main character (whose name includes that target), plus 9 target words. Each word is in the form of a colorful image which will “fly in” from various directions, keeping children focused and engaged. These PowerPoint presentations can be used for individual and group therapy, during in-person and telepractice sessions.