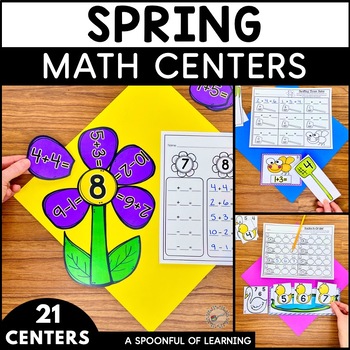 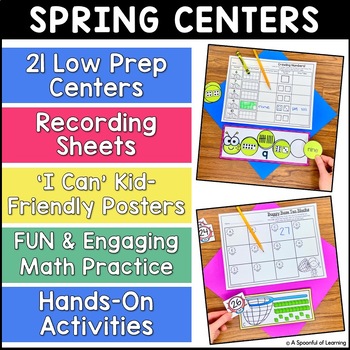 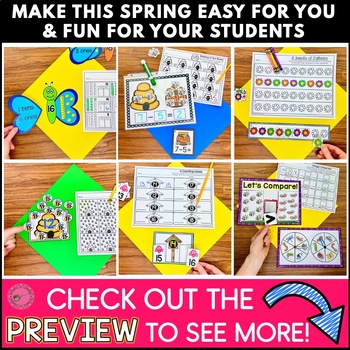 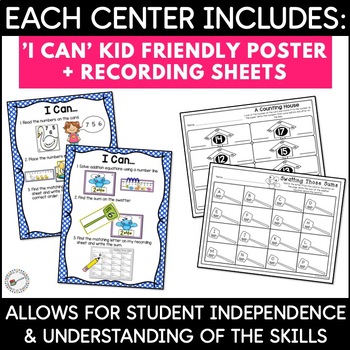 These spring themed math centers are packed with TONS of hands-on, interactive, and engaging activities! They are a perfect addition for your kindergarten classroom and have tons of fun activities to last you well throughout spring! This pack includes 21 Math Center Activities!!

Each math center activity is aligned to the Common Core and includes:

• ‘I Can’ kid friendly posters for students

• The Common Core Standards that each activity is aligned to

*Make sure to download the preview to see what is all included!

*NOTE: These activities are ONLY the MATH Activities from my Spring Math and Literacy Centers (BUNDLED)

Here are some brief descriptions of the activities included as well as the Common Core standards:

• Buzzing to the Honey (K.OA.A.1, K.OA.A.2, K.OA.A.5)- Solve subtraction equations by acting them out with bees on a subtraction mat.

• Cross it Out Subtraction (K.OA.A.1, K.OA.A.2, K.OA.A.5)- Use pictures to determine and solve different subtraction equations.

• Building Teen Numbers (K.CC.A.3, K.NBT.A.1)- Match base ten blocks as well as tens and ones to a given number.

• Race to the Flowers (K.OA.A.1, K.OA.A.2, K.OA.A.5)- A fun game where players are racing to get to the end first to win! They will solve addition and/or subtraction equations to move forward. There will be some bumps and bonuses along the way!

Don’t forget to download the preview to see all that is included!

If you are looking for Spring Literacy Centers, you can grab them in my BUNDLE!

SAVE BIG with my Math Centers MEGA BUNDLE for the entire year!

Math Centers for the Year BUNDLED

You can check out my other Monthly Math Centers below:

August: Back to School Math Centers

Visit my blog: A Spoonful of Learning

A Spoonful of Learning