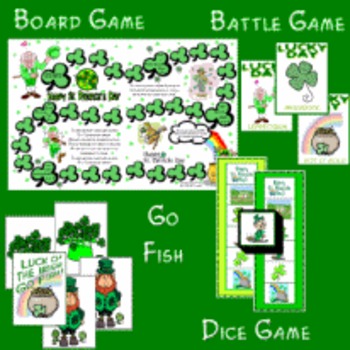 This is a St. Patrick's Day themed board game!

The first person to reach the Pot O' Gold is the winner!

Contains: 1 Irish Dice and game boards (print as many as needed). Each player receives a game board. Give each player 6 tokens or place markers of your choosing. Choose the player that will go first. The players take turns rolling the dice. When the player rolls a St. Patrick's Day character that he has not covered with a token, he covers it. If he rolls a character he has already covered, he does not cover anything, and it is the next person's turn. The first person to cover all of the characters wins!

Fun idea: use Lucky Charms cereal as game markers and eat them after the game!