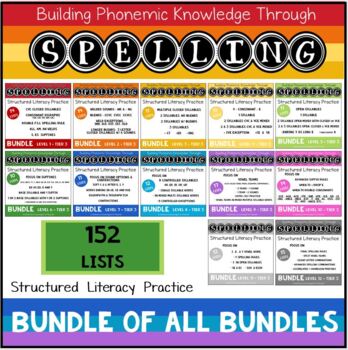 Encouraged To Flourish
66 Followers
Follow
Compatible with TpT Digital Activities
This bundle contains one or more resources that can be converted to interactive versions that students can complete from any device on TpT’s new tool. Learn more.

Products in this Bundle (49)

This Bundle will include ALL of the Building Phonemic Awareness through Spelling Skill Bundles, Levels 1 - 12.

ALL spelling skill and rules will be covered in these bundles. If there is a skill missing and someone points it out to me, it will be added to an existing bundle or added as a separate product and INCLUDED in this bundle. This bundle will NOT include editable spelling products however, just the pre-formed lists in the Structured Spelling line.

This bundle includes 152 spelling lists and could provide multiple years of instruction and/or ease differentiation as individual or groups of students can be provided spelling lists to address their specific skill needs.

BONUS * Scope and Sequence List of all 12 Steps with lists

14 Spelling Lists cover CVC syllables, with Digraphs, ch, sh, th, wh, and ck, Double f,s,l spelling rule and All, Am and An Welds.

11 Spelling Lists cover Vowel Consonant e Syllables. Starting with 1 syllable and progressing to 2 and even 3, including IVE and VE/SE exceptions.

11 Spelling Lists cover Open Syllables with 1 syllable in isolation and progressing to 2 and even 3 multi-syllable words mixed with closed and vowel consonant e syllables. Also included are unaccented A open syllables.

12 Spelling Lists focus on R Controlled Syllables, AR, ER, IR, OR, UR, in single syllable words, in multiple mixed syllables words and also including R Controlled Exceptions including double r (such as hurry or worry) and ending ar and or such as (solar and odor).

12 lessons with advanced spelling rules for y and across syllable types, when i says e in an open syllable, ie/ei exceptions and igh, eigh sounds.

I use these with the Orton Gillingham Based Wilson Reading System, but this product is a teacher developed supplemental resource and neither endorsed by nor affiliated with Wilson Language. These lists might also be used to supplement any structured literacy program or generally with early readers in a balanced literacy program.

Feel free to message me if you need more information.