Summer Centers and Activities for Pre-K/Kindergarten 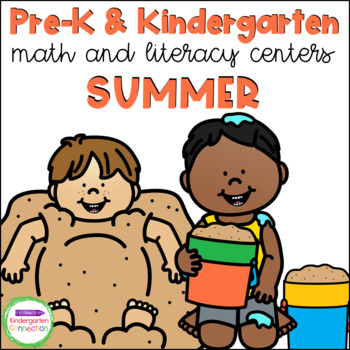 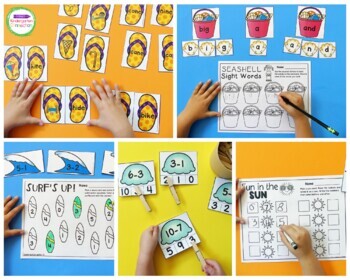 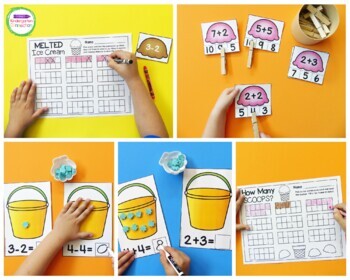 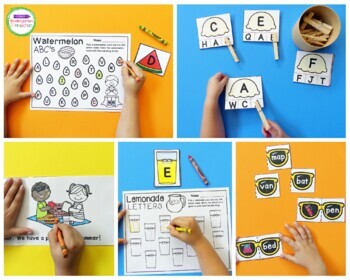 Looking for Pre-K, Transitional Kindergarten, or Kindergarten centers? These are for you! Designed with Pre-K, TK, and Kindergarten in mind, these centers will give you a variety of activities and options for your students.

This pack is filled with engaging math and literacy centers with a Summer theme.

***This pack is also available in a money saving BUNDLE***

“Summer Fun!” Emergent Reader (2 levels) - print a simple label style version, or one with a predictable sentence pattern. Copy two-sided and cut in half for two books!

Watermelon ABC’s - Pick a watermelon card and say the letter name. Color the watermelon seed with the matching letter. (Both upper and lowercase options included).

Scoop Up Sounds (2 levels) - Pick an ice cream cone and say the picture name. Color the scoop of ice cream with that beginning sound. (One set includes the letter of the beginning sound written on the cards for letter matching support)

Lemonade Letters - Pick a lemonade card and say the letter name. Write the letter on a glass in your best handwriting. (Both upper and lowercase letters included.) Print double sided for all 26 letters.

Seashell Sight Words (Editable Version Included)- Use the seashell letters to build the words on the sand pails. Record some of the words you build!

Bubble Blends Puzzles (2 levels) – Match the bubble wand beginning blends to the bubble pictures (one set includes the blends by the pictures for matching support.)

Sunglasses CVC Match (2 levels) – Pair the CVC words to the pictures to complete the sunglasses (one set includes the words by the pictures for word matching support.)

Flip Flop Magic e Match (2 levels) – Match the CVCe words to their pictures to make a flip flop pair (one set includes the word by the pictures for word matching support.)

Ice Cream Count and Clip - Count the ice cream cones in the 10 and 20 frames and clip the totals (sets to 20).

Ice Cream Add and Clip - Solve the addition problems within 10 and clip the answer.

Ice Cream Subtract and Clip – Solve the subtraction problems within 10 and clip the answer.

How Many Scoops? (addition to 10) – Pick an ice cream cone card. Use two different colors to build the equation on the ten frames.

How Many Scoops? (Counting) – Pick an ice cream cone card and read the number. Fill a ten frame to match.

Melted Ice Cream – Pick a card and read the subtraction problem. Use a 10 frame to solve it, by filling in squares and crossing them out to show the equation.

Fun in the Sun (2 levels) – Pick a sun card. Read the number and write it on a sun. Write the numbers that come before and after. (2 sets – numbers to 10 or teen numbers)

Surf’s Up! (2 levels) – Pick a wave card and solve the subtraction equation. Color a surfboard with the answer (2 sets – subtraction within 5 and within 10)

Summer Roll and Graph – Roll the die. Color a space above the summer object you roll on the graph below. See which one gets to the top first! *Inserts included if you use your own plastic sleeve dice.

Shell Counting Mats – Use playdough, real shells, or other manipulatives as “shells” on the pails by reading the number or number words (numbers to 20).

Shell Addition and Subtraction Mats – use play dough, buttons, real shells, or any other small manipulative as counters for “shells” to solve the addition and subtraction problems. Can laminate and use with dry erase markers.

Black and White Copies of color items are included at the end of the file.